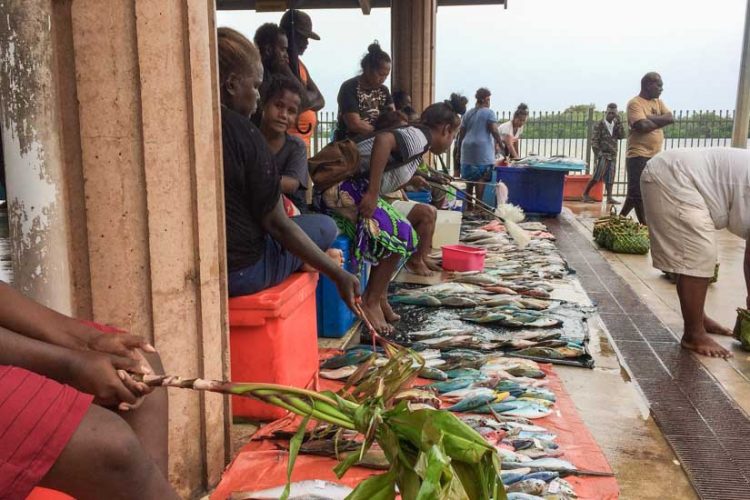 HONIARA – The World Wildlife Fund (WWF) has revealed that some fish species will likely vanish as a result of overfishing in waters near Gizo, the capital of Western Province of Solomon Islands.

Gizo has faced many life-threatening challenges and now it faces a bigger challenge in the fishing industry – an industry that was once rich in marine resources.

WWF Gizo officers carried out a study in 2020, looking at the top 10 species fishers target.

Their results show that some fish species decreased in a matter of weeks. Dafisha Aleziru, a fisheries officer for WWF, said this was a serious concern for the province and the fishing communities that relied on selling fish for survival.

“The study was done by measuring the maturity size, the spawning size of fish, and the minimum size limit of fish that are eligible to be caught,” Ms Aleziru said.

“The results we compiled have depicted that there are some species which need immediate attention. We have advised fishermen in and around Gizo to refrain from harvesting them in their hotspots.”

“Overfishing can be fatal to all fish types and stocks. When fish is overharvested, the wider food web will also be affected. On healthy reefs, algae are usually low from the grazing of some herbivores such the surgeonfish and the parrot fish, but when these fish disappear there will be no proper balance in the coral reef ecosystem, and seaweed-like algae (called macroalgae) can grow free, eventually suffocating reefs,” Ms Aleziru said.

“This is what’s happening now is Gizo and the surrounding islands.”

She said they had found that two of the popular fish species would disappear soon.

“The data collected shows that species like Acanthurus lineatus, [a surgeonfish] known locally as bebera, seki, berava or quere, and the Lethrinus olivaccus, which is locally known as long nose, misu, mihu or miu mola, are under huge threat locally,” she said.

According to the research findings, these two types of fish no longer reach maturity before they are harvested. The bebera begins to spawn at a length of about 17.5 cm, and is allowed be harvested once it reaches 20 cm. The long nose begins to spawn at about 46 cm and may be caught once it is 50 cm long.

But now much smaller juveniles were being catch.

“They have been overfished around Gizo and the nearby islands on a daily basis,” Ms Aleziru added.

She said the results showed clearly that the area had been heavily overfished over the years, with indiscriminate fishing methods used. The rising impacts of climate change were also contributing to the loss of fish. The scientific data they had collected proved that these species were in great danger.

“The destruction of the marine ecosystem has heavily contributed to the low fish population and, even worse, people tend to dive for fish, which has directly affected the growth of the fish population,” Ms Aleziru added.

Piokera Holland, a conservation officer for WWF Gizo, said: “The size of maturity for these fish to be harvested is 20 cm or 50 cm, but now you will find that most of the fish at the market are less than the actual maturity size.”

He said that the Gizo area would lose the species “very soon” from lack of conservation knowledge in the local communities.

Based on the findings of the scientific study, most of the communities had no knowledge of conservation management. Therefore, the WWF has begun to work closely with four communities in Saeragi, Simbo and Kolombangara to provide support through community-based resource management, in the hope that the two species can be saved and others protected from threat.

Apart from the WWF assistance, help may also come from the Western Province Network for Sustainable Environment (WPNSE), a network of non-government organisations operating in the province along with the provincial government’s fisheries office, to monitor the flow of a sustainable environment both Inland and Ocean.

In response to the outcome of the WWF study, WPNSE said it “will collaborate to address the issue in due time. The association will try as much as possible to not replicate the work of our members, but will meet to let each other know what they doing on a particular area.”

In light of the worrying findings from the study, the association is urging the provincial government’s fisheries office to take the lead before it is too late for the endangered species.

“We will be requesting the provincial government to put an action to the issue which the people and the marine ecosystem of Gizo are now facing,” a WPNSE statement said.