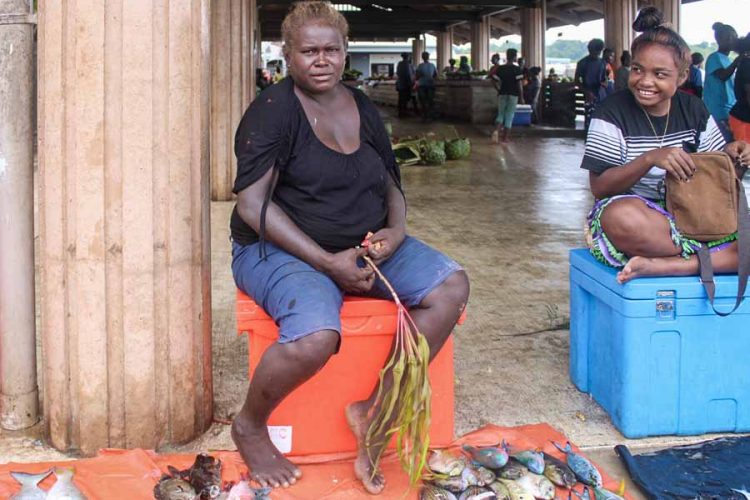 Ms Eva, of Nusa Baruku, is both a fisher and fish vendor. Photo: George J. Maelagi.

HONIARA – In recent times, communities in the Western Province of Solomon Islands have seen a drastic decrease in fish numbers in their common fishing grounds.

Two coastal communities that rely on the ocean for survival are Nusa Baruku, on Gizo Island, and Babanga, which is located on a beautiful, small, sand-banked island that lies 2 km east of the provincial capital, Gizo.

The communities need assistance from authorities to help the reefs to recover from overfishing, pollution, climate change and human development.

Unlike the overpopulated Nusa Baruku community, Babanga has a population of no more than a thousand people. Initially predominantly I-Kiribati, this community is gradually become a melting pot of race and culture in peaceful coexistence.

Just like every other Pacific island state, fish and other marine resources are an important commodity for people, who rely on them for income generation.

In Nusa Baruku, where fish is harvested every day, and this and an growing population and marine pollution mean the resources are on the edge of overexploitation. These three things threaten the coral reefs and their biodiversity, and now people have to go out far to fish for food and income.

According to Ms Eva, a fish vendor and fisher from Nusa Baruku village, the consistent use of unselective fishing methods has damaged the reefs. Eva has sold fish at the Gizo Market for more than 20 years. Over this time, she has seen the changes that are happening to the marine resources of her village.

“Growing up in the Baruku area, I saw the changes that are happening which resulted in the depletion of our marine resources. From time to time, these changes become challenges, as we no longer experience fishing like before, when it was easy and plentiful,” Ms Eva said.

Due to improper management of the resources they have, Eva said that, sometimes, they had to travel outside the islands to fish.

“Nowadays, it is not easy for us to fish in our familiar fishing grounds because of overfishing with the growing population in our community. Besides, marine pollution is contributing to the scarcity of our marine resources, not only the fish but also other seafood we normally consume,” she said.

Eva said she has been fishing for most of her life on the nearby reefs and had seen the changes happening over time in the ecosystem.

Pollution is playing a significant role in the damage of the ecosystem. The main sources are run-off from rivers; the spilling of hazardous substances such as oil and petroleum from vessels and small boats with outboard motors; and also human waste such as plastics, ghost traps, and lost nets, monofilament and lines. Once damaged, the coral reefs can take a very long time to recover.

At the Babanga community, a similar concern has been raised. Fishing has been regarded as one of the main income-generating activities on the island. There is limited arable land and water for growing root crops and vegetables, and they rely heavily on sea resources to meet daily basic needs.

In comparison, on large islands, copra and cocoa are the top seeds and contribute to incomes.

”It is a cause for concern, given multiple challenges imposed on family livelihoods and community incapacity to contain associated socio-economic issues,” the islanders said.

With the increasing problems of reef exploitation in both communities, village fishers are calling on authorities to provide project support so they can make the harvest of marine resources, especially depleting fish stocks, sustainable.

A group of fishers from Babanga said one option was to ask the provincial and national government through the Ministry of Fisheries and Marine Resources (MFMR) to step in and provide much-needed support in conservation management.

“Our only means of survival is to continue fishing, as there are no other income-generating activities available that one can make fast money just as how fish trading does,” one fisher said.

“If the provincial government and national fisheries ministry have available funding to assist us, we are willing to cooperate to save our decreasing fish stocks.”

The islanders said they had seen other communities in the country being blessed with projects such as the installation of fish-aggregating devices (FADs) to protect their marine ecosystem and to be able to sustain the reefs while populations recover from exploitation.

According to fisher and vendor Eva, one reef is normally be fished over five times a day.

“Now, it worries me to know that there will be no good place to fish in the near future, and it will be more difficult for the generation to come,” she stated.

Other villagers also raised concerns about the need for the whole community to understand their marine ecosystem so everyone could help protect it. However, in order for this to happen, they needed support from the fisheries and other NGOs to help them tackle these issues.

In an exclusive interview, a fisheries officer working for the Western Provincial Government revealed that there were ongoing problems in the provincial government and that these had contributed to the failure of some proposed fisheries projects.

“Lately, we haven’t been able to fulfill some of the projects we planned,” said the officer, who wishes to speak in anonymity.

“Most of those projects were supposed to be funded by the provincial government under the provincial financial budget. MFMR is also helping us with infrastructure support such as building provincial fisheries centres, storages and other project assistances.”

The officer said that, although his office understood that local fishers wanted project support, it was reluctant because support had been used wrongly in the past.

“For example, recently, there was a program from the Ministry of Fisheries where people could apply for assistance like outboard motors, ice-cooler freezers and other fisheries aspects of support.

“We later found out that some of these people were taking such an opportunity for granted. They ended up selling their property to other people,” he said.

As a result, the MFMR had shut down project assistance. The ministry had transferred the assistance scheme to the Constituency offices to take care of.

“The new arrangement now allows rural fishermen to apply for fishing projects through their Constituency offices instead of requesting assistance from the provincial fisheries office. So, it is clear that all the funding for all fisheries programs and projects are directly received by their constituency,” the officer said.

The officer urged the people of Babanga and Nusa Baruku to seek help to their from their Member of Parliament.

The provincial fisheries office is now receiving support from non-government organisations that operate in the Western Province. One of these is the World Wildlife Fund (WWF).

The Gizo WWF fisheries officer, Ms Dafisha Aleziru, said the organisation was providing support to communities through micro-finance for women and conservation management with the construction and deployment of FADs.

WWF has already been working with four communities in the province in the micro-finance and marine resources management support. The communities are Saeragi in west Gizo, Varu and Nusa Tuva in Kolombangara Islands, and at Riguru in Simbo.

Ms Aleziru said, “The micro-finance initiative is to help women in these communities to look at other income-generating opportunities, rather than stressing the reefs with fishing activities. Similar to the micro-finance support, the idea to deploy FADs is to ensure that the management of all sea resources is under control.”

With the growing demand of financial and conservation management support from coastal villages, the organisation is looking to also support communities in Vela la Vella and Rannonga this year. But there is a process for communities to follow, in order to qualify for any assistance from WWF, though the office is open for the public and is on standby to help anyone who is interested.

“The first step is to write an application letter to the office and we will arrange a time to meet with the community. At the same time, upon receiving the letter, we will be doing an assessment at the community along with the proposed site,” Ms Aleziru said.

WWF conservation officer Mr Piokera Holland said, “Conservation is not an overnight job, as it takes patience and hard work before we can experience its benefits. People really need to understand how important conservation is and why it is vital for our marine resources and biodiversity.”

He said WWF had faced some challenges in setting up support. The main one was, when working with communities, ensuring the rights over and ownership of the proposed area.

”This is common in all the communities WWF has worked with. Sometimes the management plan was already given, but then some people will come forward and claim that the same area is also theirs,” Mr Holland explained.

He said WWF had not received any requests for help from Babanga or Nusa Baruku. However, the organisation was open for a dialogue, should the communities need assistance to conserve their marine resources for future generations.