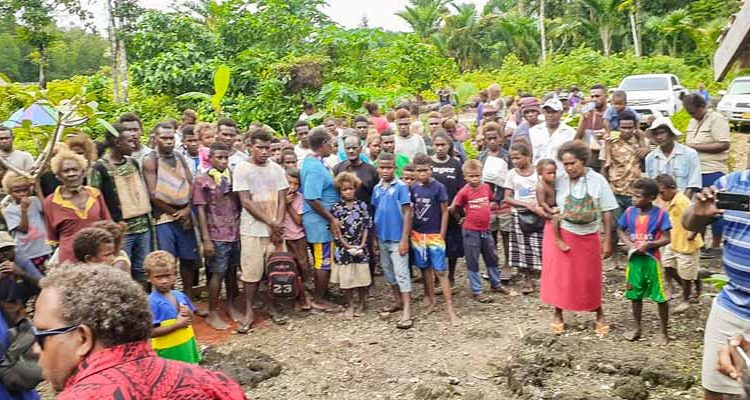 Verification has begun of the people who have claimed tribal ownership of the land where the Bina Harbour tuna cannery will be built, and nominations for positions as tribal trustees opened on Monday, 24 August.

Elections for trustees will be held in the next two weeks.

These are important steps in ensuring the building of the Bina Harbour tuna cannery is not disrupted by landowning disputes, which have halted other projects in Solomon Islands.

Verification is part of the process of formally mapping the tribal owners of the land. Its importance has been underlined by the estimated cost of the project and the level of private investment in it.

The project is likely to cost at a little over SB$2 billion dollars, with an external investor to contribute about 40%.

Celsus Irokwato Talifilu, a local adviser to the Malaita Province Premier, said the cost of the project meant the government of Solomon Islands needed to be “very careful” to build the right foundations for success — and that meant mapping the tribal beneficiaries before the project started. Mapping entails identifying and registering people from the tribes acknowledged as tribal owners by the Solomon Islands High Court.

Mr Talifilu heads the Premier’s Advisory Research Unit (PARU) for the Malaita Provincial Government (MPG). He said it was important to establish who the resource owners were before site preparation and building began.

“These exercises are pillars for a sustainable project,” Mr Talifilu said.

He said those who intended to invest their hard-earned cash in the project would not do so if they believed the land-settlement process was inadequate.

A dispute over land was settled in 2016–2017. In July, a memorandum of understanding (MOU) to commence work on the Bina Harbour project was signed. It included agreement to map tribal landowners as beneficiaries of the project. Mapping was conducted over eight days in July.

In a statement, PARU said: “The beneficiary mapping exercise is a critical part of the land-settlement process for the Bina Harbour tuna processing plant project. This exercise ensures the resource owners are rightly identified and recorded. It is also the basis for a clear beneficiary scheme for the landowning groups.

“The MPG participation is crucial as a partner in the development of the project under the newly signed MOU. It is also a good exercise for the province so that the province can help with messaging of the new scheme that is more such sustainable.”

Mapping means formally agreeing who the landowners are

The mapping exercise involves formally registering all living people among the landowning tribes. The record of each person includes a photo of them, and the names of their parents and grandparents. The list of names is then verified by the group elders. After verification, the list is given back to the group for final checking. The checking might take two weeks.

After the final list has been approved, the groups seek nominations for the election of their trustees.

Pacific Horizons Consultancy Group is mapping the beneficiaries. It conducted the same exercise for the Tina hydro project.

Albert Benisi of Pacific Horizons said the consultancy used a new approach to mapping the benefits for landowning groups. In the past, disputes over land ownership had brought projects to a halt.

“The approach taken now is different from logging, which normally leads to unfair distributions of benefits to landowners,” Mr Benisi said.

“For this approach, there will still be trustees overseeing the tribal group who are parties to the development, just as with current logging and mining operations in the country.

“But the trustees will be working for tribes as representatives only, and not deal with benefits and such.”

Because trustees would be elected, they stood as the choice of the tribes. Representation would be fair. In the past, those who were close associates of the land would be automatically qualified to be a trustee.

“One of the good things about this approach is every single member of the tribal landowning groups, from infants to elderly individuals, will be the beneficiary of the Bina Harbour cannery project,” Mr Benisi said.

He said that mapping would be completed for both primary and secondary rights holders of Bina land, and that everybody would have the same benefits from the cannery once it was fully operational.

Any company that runs the cannery will need to buy shares directly through the bank accounts of the individuals registered under the tribes. Young people would be eligible to receive their shares when they turned 18.