From the shoreline to the high seas: Esther Wozniak’s story 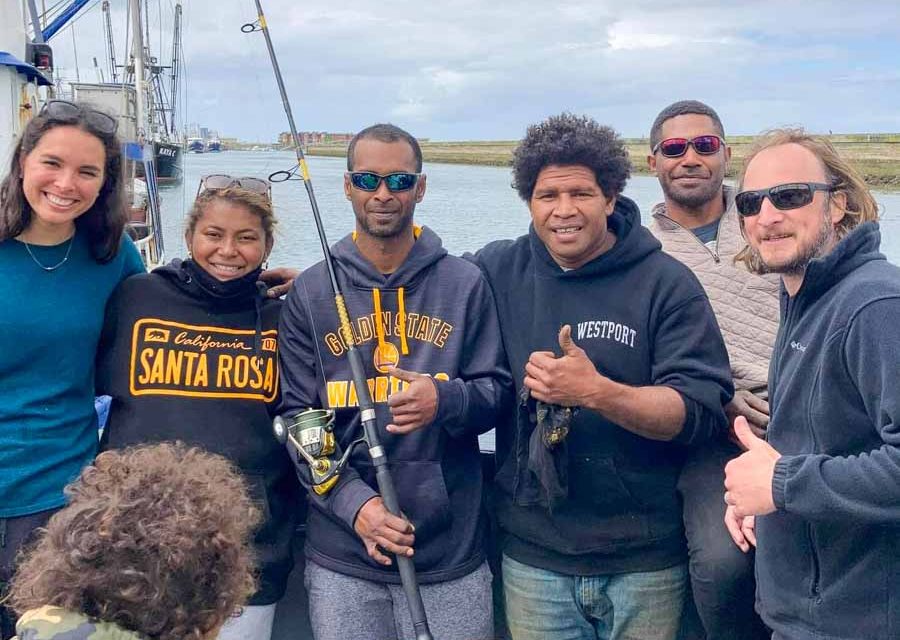 Esther Wozniak’s childhood experiences of growing up in a fishing family in Fiji have guided her as she has navigated her way through the challenges of life to become a key person in the work of reforming high seas longline fishing.

Esther is a principal associate with the Pew Charitable Trusts international fisheries program. Her work focuses on reforming transhipment regulation and monitoring of longline fisheries.

Esther holds a bachelor’s degree in marine science from the University of the South Pacific (USP) in Fiji.

When she was growing up, she recalls, she loved to join her grandmother and her aunts in gathering what they could for family dinner along the shorelines of Lami, outside Suva. Her brother, uncles and male cousins joined her American father on his fishing vessel as they trolled for albacore tuna across the Pacific Ocean.

She went through high school and entered USP in Laucala Bay.

Following her marriage, she found herself in Washington, DC, and when the opportunity arose she joined Pew, the leading marine conservation organisation that focuses on tuna fisheries in the region.

Esther told me her story during an interview this past week.

IT: Who is Esther Wozniak?

EW: I was born in 1991 in Suva to a Fijian mother and American father. Fijian is my mother tongue. I never met my father’s family, so all I knew was Fiji and my Fijian family. My Bu (grandmother) is from Tailevu, my Tai (grandfather) is from Rewa, and I grew up in Lami, where most of my family still live.

Some of my best childhood memories include when we would go taga moci – to catch freshwater prawns – using handmade nets. They were used as bait to catch reef fish such as kabatia (thumbprint emperor) or the prized kawakawa (grouper). We would use hand lines wrapped around old plastic bottles with tiny hooks and a bent piece of lead for the weight.

When my mum, cousins and I came back from fishing, everyone had a job to help get dinner ready. Some of us would scale, gut and clean the fish, others scrapped coconut for miti (coconut milk) or peeled and boiled taro. I recall taking some fresh fish over to my aunt’s house and getting some lemon and chillies, then promptly running back home to join everyone on the floor as we shared the meal. This was such a special time.

These experiences taught me to respect the food on our plates, where it came from and who caught it.

In the meantime, my brother, uncles and male cousins had joined my father on his vessel that trolled for albacore tuna in the South Pacific.

IT: Did you have any thoughts that you would get into the sector you are working in now? When did that happen? Were there any major influences that helped shaped your thoughts and plans?

EW: Growing up in Fiji in a fishing family, I always knew I wanted to do something marine related. When I got to the University of the South Pacific, I studied marine science and fisheries management. A year before completing my studies, my now husband, who was a Peace Corps volunteer in Ra, Fiji, presented my family with a tabua(ceremonial whale tooth) and we were quickly engaged. At the end of his Peace Corps service, he got a job as an environmental engineer at the US Environmental Protection Agency and we had to make the very tough decision to leave Fiji.

Moving to Washington DC was hard. I missed my huge family and the ability stroll down to the river to fish or just stare at the ocean. I eventually joined the Pew Charitable Trust’s global shark conservation team and was absolutely ecstatic to be able to work with and in the Pacific Island countries. A few years ago, the program evolved into what is now considered the Pew international fisheries program. 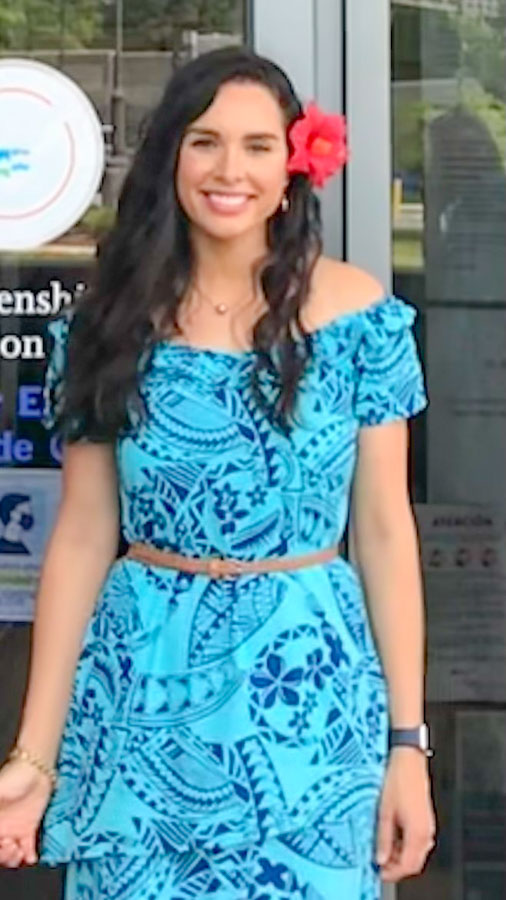 Esther retains some Pacific Island style although she now lives thousands of kilometres from Fiji. Photo supplied by Esther Wozniak.

IT: Are your brother and cousins still involved in albacore fishing?

EW: My brother, uncles and cousins all still work on albacore fishing vessels. They troll the South Pacific for albacore tuna and then bring the boats up to the USA or Canada region for the northern albacore season. They all still live in Fiji and are always happy when they are able to bring the boats home to Suva.

Usually, they are able to fly back home for a couple of months between seasons, but because of COVID they haven’t been able to go home for almost two years now.

While they were stranded in the US last month, I flew out to see them in Seattle. We had a mini family reunion where I made lamingtons, cassava cake and babakau (pancakes baked with yeast). There was also a lot of kavadrinking and we were joined by other Pacific Islanders working on boats there.

While it was great to reunite with family, it really bothered me that they were not able to leave the boats. Imagine being out at sea for months at a time, and then when you finally reach shore, you are told that you can’t go home and you can’t leave the boat or step onto US soil. If they had offloaded fish in Canada, they would have been able to step off the boats and at least be on land. But where they offload fish is dependent on the prices at the time.

My uncle made a comment to me that really hit home. He said: “We as Pacific Islanders take these boats to South Pacific waters and fish our natural resources to bring back here … but once we get here, they take the fish and tell us to get back on the boats. We cannot even stand on their land.”

This really upset me and they explained some of the discrimination they had faced. I called the immigration officer patrolling the area to explain that COVID has left them stranded here. There needs to be some leniency. All I wanted was to be able to sit with my family to share a meal, similar to when we were growing up in Fiji, sitting on a mat. I explained that they had been out at sea for so long and would appreciate being able to leave a cramped boat to have their feet on land. But alas, she said they could not.

IT: Where did you start working? When was that? And how have you seen things as you progressed?

EW: I worked in the private sector before joining Pew in 2017. During this time, I have seen quite a bit of the work evolve.

During my time on the Pew shark team, we successfully pushed for protections to regulate international trade of sharks and rays at the Convention on International Trade in Endangered Species of Wild Fauna and Flora (CITES). I enjoyed this work because we got to coordinate with agencies like the Secretariat of the Pacific Regional Environment Programme (SPREP).

We also passed domestic regulation for a shark sanctuary in Samoa waters. Now I work on regional fisheries management organisations, RFMOs, and it is a little more disconnected from working with actual communities, but still very important for global fisheries’ sustainability.

Under the international fisheries program, we work to reform high seas longline fishing by improving transhipment regulation and monitoring longline fisheries. I focus on advocacy efforts within countries, with RFMOs, and with United Nations agencies to ensure the sustainability of global fisheries. 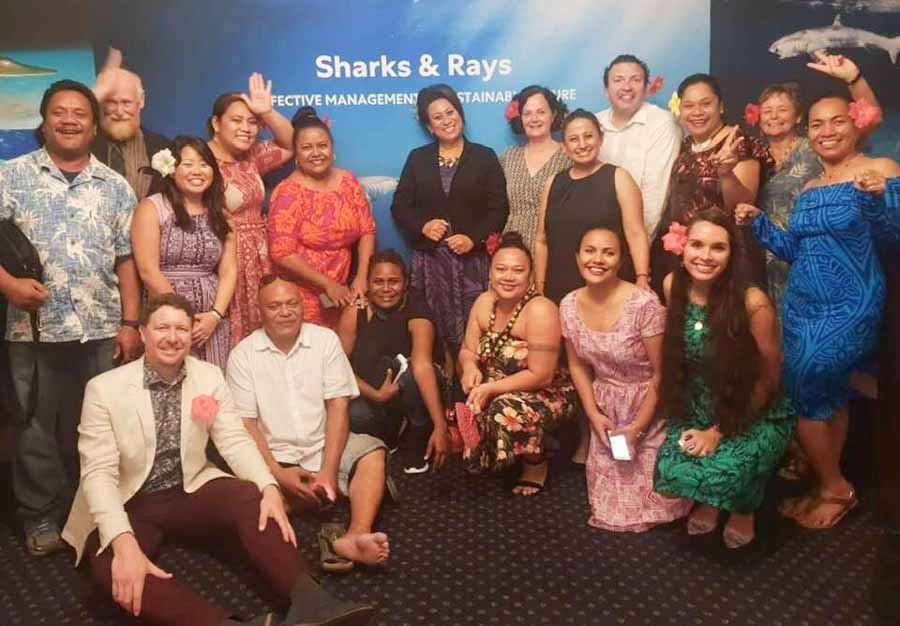 IT: What are some of the challenges you have faced? And how have you been able to handle those challenges?

EW: Moving to Washington DC, the first thing I missed was warmth – in more ways than one. Winter was tough but the lack of bula smiles and spirit was even harder. We eventually created our own little village of friends from all over the place.

At work, I am constantly code-switching – alternating between two languages, and ways of behaving and presenting myself – and trying to put my best foot forward to show that someone from a small island, who studied at a university they have never heard of, can produce work on par with all the US university graduates.

Most recently, I had to work really hard to prove that I should lead some of our work in the Pacific region. Working in a conservation-focused organisation, I also try to make it clear that we cannot generalise about all fishers. In my head, I am usually thinking about my family of fishermen and I know they care about the sustainability of their operations. So, there needs to be continued coordination between the two groups of NGOs and industry.

Knowing how much work Pew did in the Pacific, I expected to have more than one other Pacific Islander working here. That was not the case. Fortunately, things are beginning to shift as upper management realises the importance of working with people in the regions, where we are pushing for ocean conservation.

IT: In your current position, what is the most critical issue you deal with? How does that affect the industry you work in?

EW: There need to be more Pacific Islanders in this field. We are currently working on a report that looks at how to improve participation of Pacific Islanders in senior fisheries roles. This is work that is slightly different from my day-to-day mandate, but it is an issue I think that also needs to be tackled.

Pacific Islanders have been blessed with glorious marine resources, and organisations should be empowering them to take the lead on conservation or fisheries management efforts. As part of my job, I manage multiple contracts and consultants, and I am always looking for Pacific Islanders with the interest and commitment to do this work to be able to advocate for more transparent fisheries supply chains.

IT: What would be some advice you would like to pass on to younger women in the region who might be interested in working in the tuna fisheries sector or fisheries in general?

EW: Work on your writing skills. This is an ongoing journey for me as I generally think in Fijian, then translate it to Fijian/British English, before American English and then finally matching it to the organisation where I work. Depending on the audience, one needs to be able to effectively communicate important fisheries issues in order to help those removed from the oceans understand what is at stake.

Also, network and find multiple mentors. There are now a few more women in high-level fisheries roles. Reach out to them and show interest in opportunities to learn. There is so much you can learn and develop in as a professional when you look to those who have come before you.

IT: Is there a way you are trying to help Pacific people manage their exclusive economic zones and tuna fisheries resources?

EW: Yes, my team mostly works at the Western and Central Pacific Fisheries Commission (WCPFC), where we advocate for secure, comprehensive rules and consequences for international fisheries management to support healthy, resilient marine ecosystems and fisheries over the long term.

Header image: Esther (left) visited her brother and cousins when they were confined to their albacore fishing vessel after unloading tuna in Seattle. Photo supplied by Esther Wozniak. 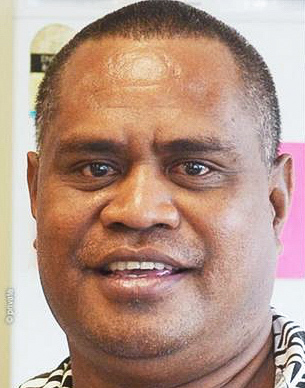 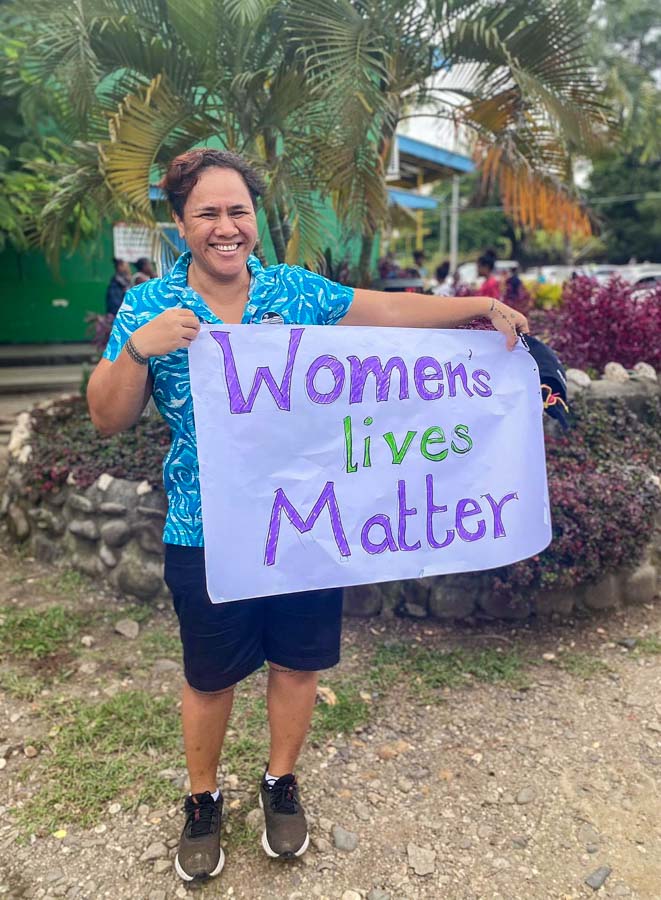 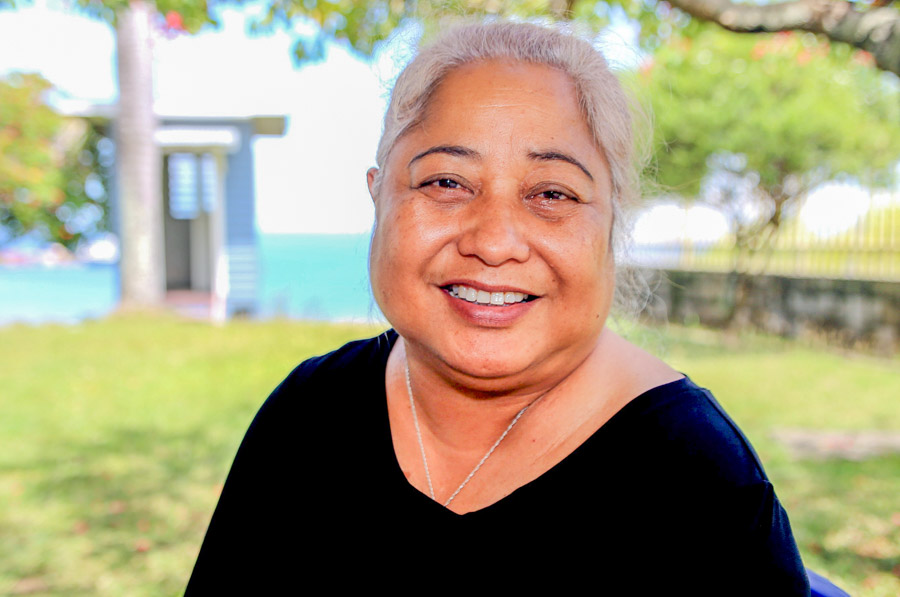 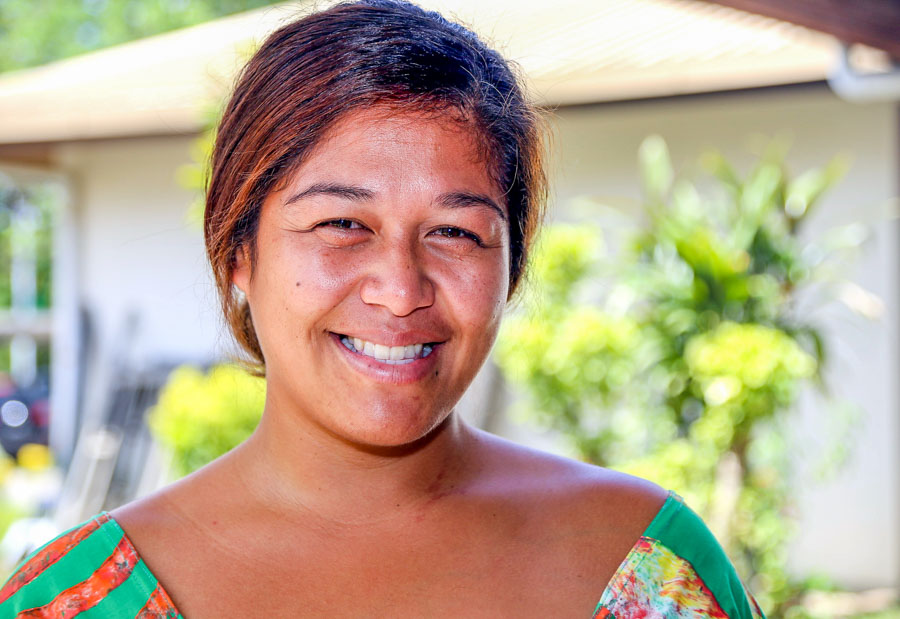