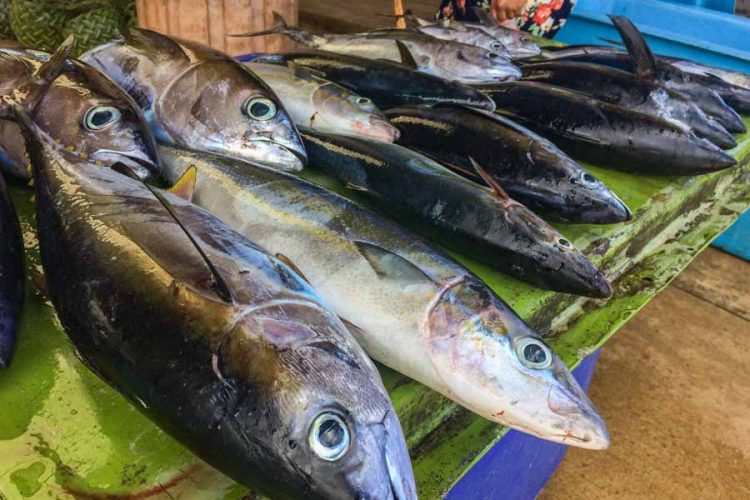 HONIARA – High market fees imposed on tuna vendors at the Gizo Fish Market, in the Western Province of Solomon Islands, are forcing more tuna fishers to revisit the coastal fishing grounds, and have led to unsustainable fishing.

Gizo Fish Market is normally restocked with fish every day, as people from communities around the provincial capital take turns to sell their fish. This usually makes it easy to control the price of fish at the market. But now a problem has arisen over the fees charged to sell fish.

Tuna vendors want answers from authorities on why they have to pay $SBD20 to sell their catches at the Gizo market. People selling reef fish are charged SBD$5.

Tuna vendors are concerned because they spend more money and risk their lives to travel out in the open waters to fish.

This has raised a feud among the tuna fish sellers in recent times.

Ms Namu Avo is from the Babanga community, outside Gizo Island. She is a frequent vendor at the Gizo market and one of those who has questioned the fee differences.

“I felt disappointed with how the authorities are charging the fees for fish vendors at the market,” Ms Avo said.

“Looking at the difference of SBD$15, it is very expensive for us tuna vendors, having put more effort, time and also more money to fish for tuna.

“Sometimes we return with very few tuna, maybe less than 20, and really need to sell them out to repay all the expenses incurred on the fishing trip. They will still charge us the same amount of fee. This is really unfair to us tuna vendors.”

Ms Avo and other tuna vendors at the Gizo market said authorities needed to consider the challenges and expenses that they endured to bring fresh tuna to the market.

The tuna fishers’ toil is dangerous and difficult. They have to wake as early as 2 am to prepare before heading out to various fish-aggregating devices (FADs) to fish.

According to Wesley Misu, a fisherman and vendor from the Titiana Community, outside Gizo, the trip to reach the FADs can take up to 5 hours.

“Travelling out into the open seas in search of various FAD devices is very difficult and dangerous. At the same time, it is also expensive,” Mr Misu said.

“The weather, too, can be unpredictable. Therefore, we have to also take extra precaution, especially when the sea is rough and the destination is too far to reach.”

Fishers sometimes have to cancel their fishing trips when there is no fuel or when the weather is severe.

Ms Avo also said that fishing was a challenge for tuna fishers.

“To make it worse, when we came back exhausted to the market, we are told to pay the high market fee without being certain that our catches will be completely sold,” she said.

“This is a real challenge for me as a tuna vendor, while the reef fish sellers only take advantage of the reefs and doesn’t spend a lot of money to go fishing for tuna and just exploit the nearby reefs.”

The Gizo Fish Market was supposed to make selling fair to all, so that communities near Gizo could sell their fish each day. Each market day allowed vendors from two communities, including Titiana, Nusa Baruku, Babanga, and Saeragi.

“Therefore, as a community, we have to take turns to sell our catches at the market. This is an arrangement that a lot of vendors here at the Gizo market are very unsupportive of,” Ms Avo said.

She said she had found out that fish vendors at the Noro market were charged SBD$5 regardless of being a reef fish or a tuna vendor.

However, at Noro Market competition was not high as it was at Gizo. It was lessened because the National Fisheries Development unloaded most of its catch to the SolTuna cannery there.

Ms Avo said that at Babanga there were a lot of boats and that nearly all families on the island went out to fish, as it was their only means of survival.

“For us at the Babanga community, the competition at the Gizo market at times can be high. Some of us normally sell little quantity, but when other fishers or vendors comes with high fish quantity and started dropping their prices, we have no other options but just follow suit. So, there is no understanding between all tuna vendors at the market,” Ms Avo said.

“Such a situation will force fish prices to drop to as little as $10, and it will not meet the expenses we incurred to travel out to fish in the open seas,” Ms Avo said.

Turning to reefs as a substitute for tuna fishing

According to Ms Avo and Mr Misu, the misunderstanding between the tuna vendors had forced many fishers to resort to fishing in the nearby reefs. Too much fish was being harvested, so that unsustainable overfishing was occurring in the reefs outside Gizo.

“We are faced with a lot of challenges every day, from meeting the needs in our own homes and of our customers and clients at the market,” Mr Misu said.

“Fishing is the only means for us to earn money, since there is no land available for us to do gardening. The money we get from each fishing trip is used to pay for food, children’s school fees, and other basic necessities. Therefore, we have to try as much as possible to meet our daily targets.

“We even have customers and clients on standby to pay from us, either at the market area or their residential homes. When we are not able to fish for tuna in the open seas, we have to revisit the local reefs to help sustain our families.”

Ms Avo said her husband had had to forego tuna fishing trips.

“My husband is a tuna fisher, but at times when we do not have enough finance to set out on fishing trips, he had to forego the trips and opt to fish in the nearby reefs. This is not only us that normally face such issues; it is a concern for a lot of families in the Babanga community,” she said.

“I believe such practice is the reason there are limited fish stocks in our reefs. There are also no sustainable management plans being put in place for us to follow.”

Due to the rise in unsustainable fishing practices, tuna fishers and vendors at the Gizo market have called on local authorities to reconsider the fees charged at the market, so that they, too, can preserve their reefs for future generations.

Gizo Town Council clerk Charles Kelly said the local council was not responsible for collecting fees from vendors at the market.

But he said the council was alarmed at the level of overfishing outside Gizo.

Gizo Market Master Moffat Maeta said his office was fully aware of the matter, and that his officers would try and sort out the situation so it was fair to all. He said the fee collectors were often lenient with reef fish vendors, which resulted in the low fees charged instead of the unstable fees.

“Normally, the fish market fees are charged at SBD$20 across the board for all fish vendors. This is clearly stated in the Western Provincial Government Market Ordinance.

“My office is aware of the fee differences as it’s been reported,” Mr Maeta added.

There were plans to review the market ordinance and the fish market fees.

Mr Maeta said that, because of the rise of overfishing in the province, especially around Gizo, the provincial government needed to review the fees charged at the Gizo Fish Market. One idea being considered was to reduce the fees charged to tuna vendors, and increase the fees for reef fish vendors, as a way of making fishing on local reefs less viable.

By imposing high market fees on local fishers who contributed to unsustainable fishing in the nearby reefs, it was projected that they would have no other option but to travel into the open seas to fish. This practice would allow local reefs as common fishing grounds to recover from overfishing.

“I will have a dialogue with my officers of the Market’s fish section and those from the provincial market steering committee,” Mr Maeta said.