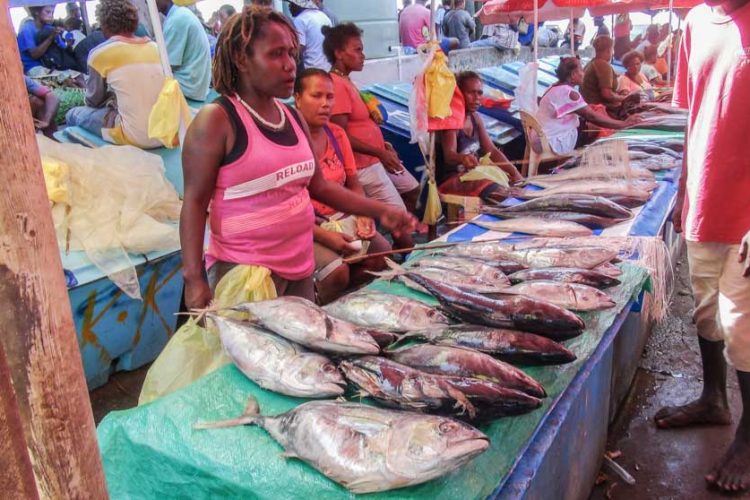 Fish vendors at Honiara Central Market wait for the return of busy days selling fish like this one. Photo: Ronald F. Toito’ona.

HONIARA – In the provinces of Solomon Islands, a rising interest in fishing by people in coastal communities is helping keep the country’s fishing industry active amid the COVID-19 pandemic.

The Permanent Secretary of the Ministry of Finance and Treasury, Makini Dentana, has confirmed that the fisheries sector is the only industry currently generating revenue in the Solomons.

“The good news is that, despite the COVID-19 pandemic crises globally, our fisheries industry, especially Soltuna, is still generating revenue to the country,” Mr Dentana said.

Records from the Ministry of Fisheries and Marine Resources (MFMR) show a steady increase of revenue collected from fisheries exports and licence fees by both inshore and offshore fisheries activities in recent years.

But with the current closure of the Solomon Islands border and other pandemic restrictions, there has been an increase in fishing, as most working-class people have been laid off or made redundant due to COVID-19.

And despite the restrictions and the introduction of the State of Public Emergency (SOPE) by the government in April, purse-seine vessels that continue to fish in the Solomon Islands exclusive economic zone (EEZ) are still transhipping at the Honiara port.

The main fish market in Honiara remains open, and continues to benefit from the tuna industry, just as it did before the arise of the coronavirus SARS-CoV-2. This market is also where most of the fish stocks from the provinces end up.

The country needs the fisheries: according to the Central Bank of Solomon Islands, the local economy is projected to shrink by 4.99% by the fourth quarter of this year.

Fisheries one of four sectors that hold up the economy

In an interview with the Solomon Islands Broadcasting Corporation, Mr Lilo said that, while COVID-19 continued to ravage the global economy, small economies like that of Solomon Islands would be hit especially hard. The country needed to set its priorities to make the most of gains.

“A good part of our territorial boundary is made up of waters where we can fish, and we need to focus on both offshore and inshore fisheries. That will put our economy back on track.”

He said the fisheries industry was different to other important industries such as tourism, which involved complicated processes in order to operate. The fisheries industry could operate more freely, but needed continued commitment from the national and provincial governments.

“With fisheries, the resources belong to the state, it only requires both the national and provincial government to attract the right investors to establish processing facilities here, say in all provinces,” Mr Lilo said.

In recent times, the national government has identified fisheries as one of the four sectors with agriculture, mining, and tourism that stimulate most growth in the Solomon Islands economy.

The government hopes the four sectors will earn adequate incomes for the national purse to replace income earned from exporting round logs to China, as economic planners envisage all harvestable forests will have been logged in three or four years.

The logging industry currently provides about 50% of the government’s annual income.

With the inception of focus on the four sectors, the government aims to set up 50 fisheries centres and 50 economic zones in the 50 constituencies countrywide.

For the fisheries and tourism sectors, contacts have been established between ministries and foreign investors, mostly in Asia.

When the first SOPE was declared, Fishing Village market in east Honiara and White River market west of Honiara city were forced to close down.

Only the Honiara Central Market has been allowed to continue operating, but under strict rules. This has allowed fish vendors to continue to work. But nearly all fish vendors have left Honiara for their home provinces, as part of a repatriation exercise by the national government conducted when the lockdown began.

Local vendors have continued to work, and now, three months on, those from other areas are slowly returning. However, the Sunday Isles newspaper recently reported that a cash-flow problem was hitting the vendors hard, as the number of customers was well below the usual and was affecting daily earnings.

“Local vendors at the Honiara Central Market are attracted to this occupation because of the possibility of earning relatively medium to high incomes,” the paper wrote.

“The impact of the state of public emergency on Honiara’s formal sector, which includes many fish-market vendors, will be huge.”

It said that vendors’ economic survival was threatened. They had already had “months and weeks with less cash flow as their customers spend less on their fresh fish” and would have to go through more if the SOPE was extended.

Sunday Isles reported fish vendor Henry Fafaluta as saying, “I find it very challenging during these past months by trying to earn the amount to cover the expenses I spent daily for fuel.”

He explained that normally his earnings depended entirely on his catch.

“If the catch is good then, I will surely earn good money that day, but compared to now, even if my catch is good, my earnings will still be low, due to the cash flow problem we experienced now.”

The person in charge of the fish section at the Honiara Central Market, Betty Fraser, said that she had seen vendors struggling in the current situation.

“Vendors struggle every day to get the amount of profit to cover their expenses, some for their catch, and others for purchasing from the fishing vessels. With that they also try their best to at least earn a little extra to take back home to their families at the end of the day,” Ms Fraser said in the Sunday Isles.

Ambrose Sade normally gets fish discarded during transhipment in Honiara and sells it at the Honiara Central Market. He has observed changes in the way customers have bought fish in recent months.

“During the SOPE active period, I was fully engaged in fish sales here at the market. Everything is normal, except that the number of customers coming to buy fish at the market is a little below my normal take,” Mr Sade said.

“Cash flow is definitely an issue for me and the other fish vendors. Otherwise, everything is just normal here, as we are still keeping the fish-vending activities going.”

Vendors hope that an economic stimulus package proposed by the national government will be implemented soon and help to keep them going until sales pick up again.