This year’s meeting of the Western and Central Pacific Fisheries Commission has concluded, with all but the Cook Islands happy with the result.

The meeting ran until the early hours of Friday morning despite being scheduled to finish on Thursday afternoon,

Nations were forced to make concessions to reach a deal.

Parties to the Nauru Agreement chief executive Ludwig Kumoru said the Cook Islands was disappointed with a lack of allocated fishing days in the high seas.

He said next year the commission would focus on enforcing the high seas but the negotiation of a new Tropical Tuna agreement had a successful outcome.

Also negotiated was permission for Samoa’s fishing vessels to directly offload in American Samoa instead of landing in Samoa first and shipping from there.

The commission noted the previous policy was unfair on Samoa, who was facing economic hardship through the reduction of albacore catch rates.

Commission chair Rhea Moss-Christian and executive director Feleti Teo said in a joint statement the meeting result would ensure the long-term sustainability of tuna stocks in the Western and Central Pacific fishery. 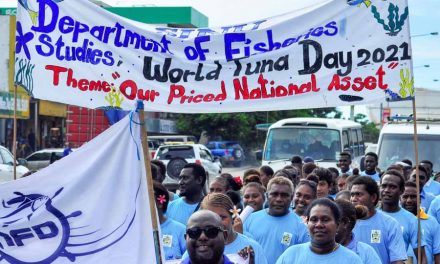 Solomons reflects on its ‘national asset’ for World Tuna Day