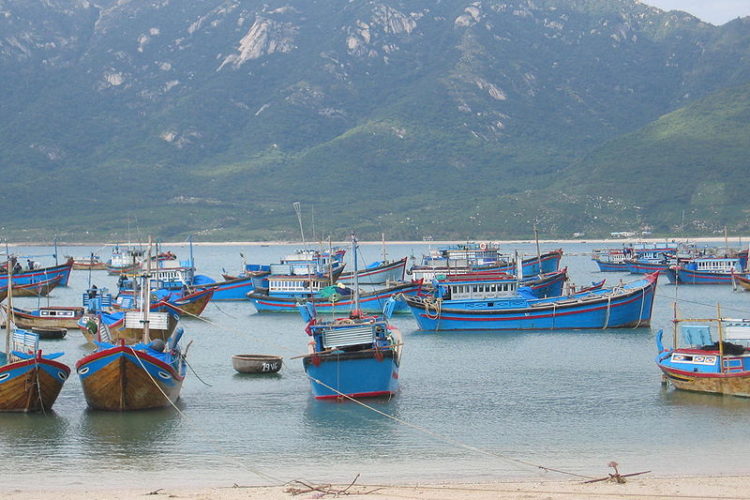 Manila, Philippines —- Vietnam is again under pressure to explain what measures it will put in place to stop the small blue boats poaching the reef resources of the Western and Central Pacific Ocean.

Federated States of Micronesia (FSM) and New Caledonia representatives at the 14th Regular Session of the Western and Central Pacific Fisheries Commission (WCPFC) here reiterated that the Vietnamese blue boats are unwelcome in the region.

“We have a saying, that just because you are not catching them, does not mean they are not here,” Eugene Pangelinan, head of the FSM’s National Oceanic Resource Management Authority (NORMA).

Pangelinan said that before coming to the WCPFC meeting, there was optimism that the Vietnam government had heeded the calls for it to stop blue boats departures, as sightings in the Pacific had become rare since the incursions were brought to the attention of Hanoi at last year’s WCPFC meeting in Nadi, Fiji.

Although the blue boats target coastal reef resources and not tuna, Pangelinan said, this is still a problem of IUU fishing and affects the ecosystem.

“The tuna commission is managing tuna fisheries, what we are calling on Vietnam are to step up to the plate and undertake its flag obligations.

“We will be looking for Vietnam’s more detailed or direct response on their monitoring, control and surveillance (MCS),” Pangelinan said.

New Caledonia’s representative Manuel Ducrocq earlier warned the WCPFC that the blue boats are back in the region.

In an update to journalists covering WCPFC he said 10 tonnes of gutted and salted sea cucumber were found on board in 58 barrels. Shark fins were also found during the apprehension. These had been caught in a shark sanctuary, in violation of international rules and New Caledonian law.

In addition, he revealed three more blue boats had been sighted sailing along the sea boundary between New Caledonian and Australian waters but the vessels had disappeared before authorities were able to apprehend them.

Ducrocq said blue boats are a problem in New Caledonia and pose a huge cost in feeding the crew members of the detained boats.

He said that this is a problem of IUU that Vietnam should fix.

Vietnam is a cooperating non-member of the WCPFC.

“If Vietnam’s response (to the blue boats issue) is not sufficient, we may have to review its status at the WCPFC,” Ducrocq warned.

In May, FFA issued a collective statement to help Pacific countries to address the newest threat for Pacific reef systems, Vietnamese Blue Boats.

Movick said that aerial surveillance of the reef systems within Pacific exclusive economic zones is part of the tools that can be used to spot these blue boats.

“We hope that by January we start to mount the aerial surveillance program that we can deploy in North Pacific, in FSM and Palau,” Movick stated.