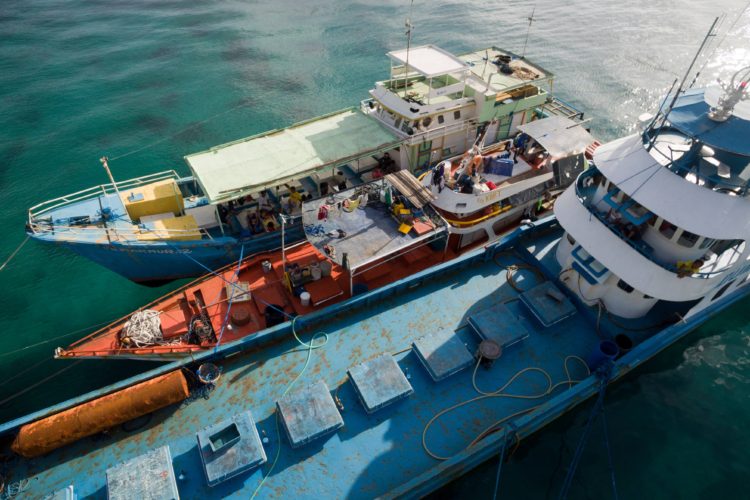 An apprehended Philippine fish carrier sits moored at Palau's Marine Law dock along with other vessels apprehended last year. the fish carrier were found to contain 30 tonnes of illegally caught Tuna. The Tuna were distributed to locals free of charge. (Photo by Richard W. Brooks)

The Palau government’s case filed against the Philippine fish carrier, Gene 8, was dismissed last week due to lack of government witnesses.

The Attorney General’s Office filed a motion asking for a rescheduling of the trial, but Associate Justice Kathleen Salii denied the move.

Based on the motion of continuance of the AGO, the Palau government could not make  its case without witnesses because they were unavailable to appear before the court as prosecution witnesses.

The Gene No.8 was found moored to a fishing aggregation device, after which the marine officers boarded the vessel for an inspection.

The marine officers who were part of the surveillance operation during the apprehension of Gene 8 were at the time of the trial either in training off-island or on a surveillance mission outside of Koror.

The AGO also cited that that a new civil attorney hired by the AG’s office to handle the case has left the country in October and his contract was subsequently terminated in November.

Defense counsel for Gene 8 opposed the motion, saying that the AGO office had enough time to prepare for the trial and that the absence of witnesses during the trial is “inexcusable,” since they were aware of the trial date 74 days earlier.

The Gene 8 itself was released on Oct 1 after posting a surety bond and allowed to sail back to the Philippines with the three remaining Filipino fishermen sent back home with the boat.

The Palau government offered to settle the case prior to the trial but the defense rejected the offer.