Kiribati and other Pacific nations will tell the Pacific Tuna Commission to enforce fishing rules on the high seas, when the Commission meets in Nadi next week.
Weak management regimes and failure to enforce the rules in seas outside the 200-mile exclusive economic zones of Pacific nations reduces the fishing revenue going to governments and undermines their conservation efforts.
The Tuna Commission is the body responsible for setting the rules of the fishery. Its members include all nations fishing in the region as well as Pacific island nations.
There is concern about both purse seine and longline fishing on the high-seas but uncontrolled high-seas longline fishing is a particular issue, according to Ludwig Kumoru CEO of the PNA countries.
“The tuna Commission (WCPFC) needs to be concerned with non-compliance with fishing rules on the high-seas,” Mr Kumoru said ahead of next week’s meeting.
“Currently there is virtually no control on longline fishing, most of which takes place on the high seas.
Mr Kumoru said a ban on transshipment of tuna at sea and requiring longline vessels to offload in port would go a long way towards controlling high seas fishing.
Other priorities for Pacific countries at the WCPFFC include:
*Measures to improve safety for observers working on fishing boats. Observers are the eyes and ears checking the catch and helping with compliance but they face risks of intimidation or violence as boat masters do not always like what they report.
*Progress with harvest control strategies for each of the four commercial species of tuna. These strategies are a way pre-agreeing rules so that the long-term future of stocks is assured or in the case of bigeye tuna which is already at critically low levels agreeing on a path to rebuild stocks.
Decisions at the Commission are made by consensus. In the past Pacific nations have found it hard get support for their management and conservation initiatives because of the wide range of differing interests involved and resistance from the fishing nations.
Conservation organisations say the failure of the Commission to halt declining fish numbers, set adequate rules and impose sanctions on wrong-doers has got to a crisis point.
Greenpeace says Commission member countries should remember they are legally obliged to prevent or eliminate over-fishing and reduce excess fishing capacity. 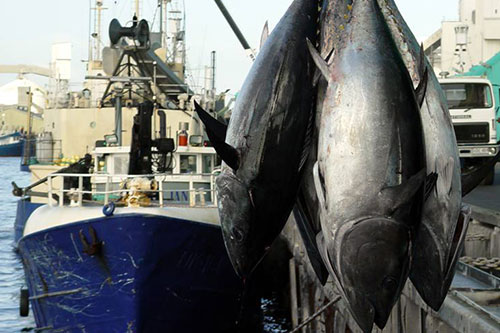