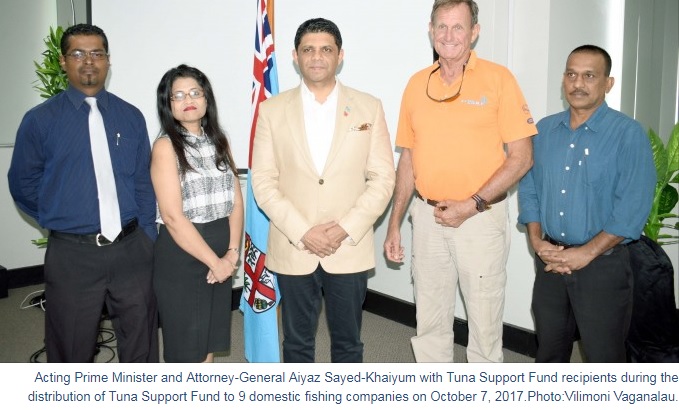 Republished from the Fiji Sun, 8 October 2017

Seven fishing companies benefited from the Tuna Support Fund (TSF) when Acting Prime Minister and Minister for Economy Aiyaz Sayed-Khaiyum distributed about $3.2 million to them on October 7.

The TSF was setup in 2014 to mainly provide funding assistance to fishing companies that are locally owned and also controlled. The fund was created to assist these companies to raise their financial capacity to compete with foreign fishing companies that receive large subsidies from foreign Governments. To start the fund, Mr Sayed-Khaiyum said six cent per litre of bunker fuel levy was imposed of which 4 cents was transferred to the TSF account.

The issue of distributing the funds went on for two years and they finally came up with a formula (See: Box). Mr Sayed-Khaiyum said it was critically important for people to understand that fishing companies faced a lot of competition.

“The fishing industry is getting very restrictive because fish stocks are no longer as much as it uses to be,” he said. Moreover, there are more companies competing, more foreign companies that received subsidies, which resulted in local companies finding it difficult to compete with them.

The fishing business was prone to a number of anomalies, wherein some of them were engaged in corruption or misrepresentation of facts or not necessarily providing the right information both to the Fishing Industry Association and to the Ministry of Fisheries, Mr. Sayed-Khaiyum said.

Trying to allocate the funds was a long process, mentioned Mr Sayed-Khaiyum. From the Government’s perspective, he said there was need to support local companies, especially when they operated in an environment which was not just competitive but was also sometimes detrimental to the security of the Fijian companies. “It’s a tough business,” he said and stated that in the South Pacific, Fiji was the only country with a domestic Tuna Industry.

Reacting to the initiative, the Fiji Fish Marketing Group Ltd executive chairman Grahame Southwick acknowledged the initiative from the Government. He said; “The funds might not solve all their problems but it gives the necessary support at this particular time when they really in need.

The industry is suffering from many aspects, some of it is local but many are foreign basis and is not within the control of Fiji.” The aid from the government was a relief for the local companies.

“This gives us a bit of breathing space. We are happy now; this will take us through to the next critical years as we try and solve other problems,” he added.

Mr Southwick explained how some of them with experience of over 30 years in the fishing business had travelled through the tough road and listing the two main problems faced by the industry.

For the past 10-15 years, over fishing has been going on in the Pacific and within Fiji.

“The overfishing that is going on in the Pacific is devastating, the controls within Fiji waters are quite strong but it can be a little bit better,” he added.

This was because there were too many licenses offered within the Fiji group, which was within the powers of Fiji to fix and we working towards tying to fix that problem. The other issue, which was of concern, was the foreign fleet fishing around Fiji on our perimeters, which was not sustainable.

“Just too many boats fishing in the high seas surrounding us preventing fish from coming into Fiji,” he said.

“We can’t stop them from fishing. Before the situation can improve, the regional over fishing and the fleet has to be slashed by at least 50 per cent.

These are long term problems, and for us companies to get through the next five to 10 years, it is going to be extremely difficult,” added Mr Southwick.

He also felt that these were problems that were not solved easily or quickly, and needed a few years of recovery.

He commented that it was a matter of trying to retain the skills, market, captains, engineers, knowledge and everything in the phase of major loses by the industry.

“Some of these generations of the fishing companies are not going to be around to see the recovery.

“It is going to be a long time before private business people can look into fishing industries and say; ‘oh this is a good industry to invest in’.”

The TSF has been a blessing for the local shipping companies in the fishing space. This support is necessary so that local companies can get through this period so that in 10 – 15 years time all is not lost.

“If the industry fails, we will lose all our skills and market. The Fishing Industry must survive,” stressed Mr Southwick.

“The training, skills, engineers, the captains, fishermen, processing workers has to be reserved for the next five to 10 years down the trail.

“It is very close to failing and if it fails now, there is no future for this industry,” he added.

At the same time, it was also important to ensure that the companies receiving the funds were compliant with various regulatory requirements. And were above board in their dealings. Mr Sayed-Khaiyum said that there are fishing companies that don’t necessarily do the right thing.

For number of years, a lot of fishing companies hid behind different companies to hide their shareholding.

For instance, he mentioned how some fishing companies had stolen letterheads and made representations on different letterheads to the Fishing Industries and to the Ministry of Fisheries.

It is for this reason that only companies that were genuinely impacted benefited from the TSF.