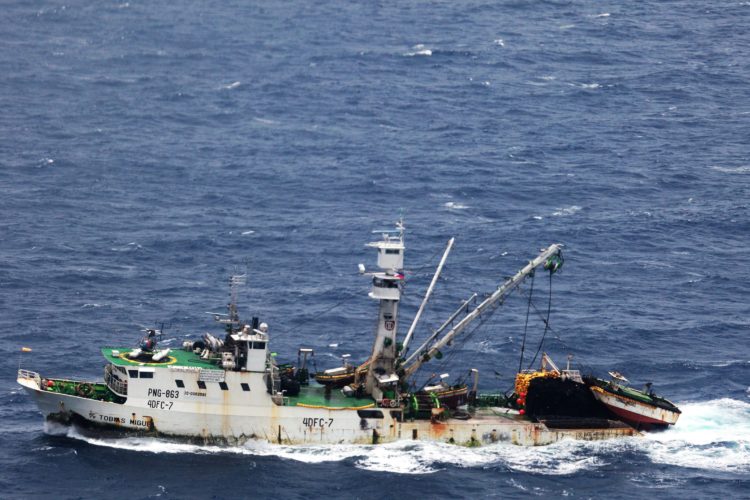 RFSC, FFA HQ, Honiara SOLOMON ISLANDS— Regional fishing fleets have ‘eyes in the sky’ watching their every move. For the past three weeks Operation Rai Balang has been sweeping the Pacific Ocean to detect and report on fishing fleets operating in the EEZ’s of Forum Fisheries Agency members.

The operation involved assets deployed by FFA members and by the QUAD partners (Australia, New Zealand, U.S. and France). Pacific Patrol Boats (PPBs) from nine FFA members also participated. It was also noteworthy for the first full operational deployment of an aircraft under the new Australian-funded Pacific Maritime Security Program.

During the operation 257 vessels were detected and 177 vessels were interrogated closely at sea. There were 59 boarding’s at sea and in port. Over 90 sea days of steaming time and 165 hours of air time were expended. With over 250 personnel involved it was one of the biggest fisheries surveillance operations on record.  In all Operation Rai Balang covered 14.1 million square kilometres of ocean.

The Operation resulted in Palau destroying seven unauthorised Fishing Aggregation Devices (FADs) within their waters and the apprehension of a Philippine fishing outrigger engaged in illegal FAD fishing. Within the Federated States of Micronesia (FSM) four vessels were apprehended at sea and another vessel apprehended alongside for suspected violations of conditions Offences included the non-reporting of catch species and the non-carriage of required permits.

Efforts to reduce Illegal, Unreported and Unregulated fishing involve not only finding illegal and unlicensed vessels, but ensuring that licensed fleets and their support vessels are not violating their license conditions.

The Chief of Staff for Operation Rai Balang, Petty Officer Bernard Pilon from PNG thanked all members and QUAD partners for their cooperation in the exercise. PO Pilon stated that “Operation Rai Balang 2018 has enhanced the effectiveness of not only the deployed assets but also of the regional team that leant a lot through country briefs and the experience of planners, watch-keepers and observers. The results speak for themselves.”

Inquiries may be directed to the FFA Acting Deputy Director General on perry.head@ffa.int