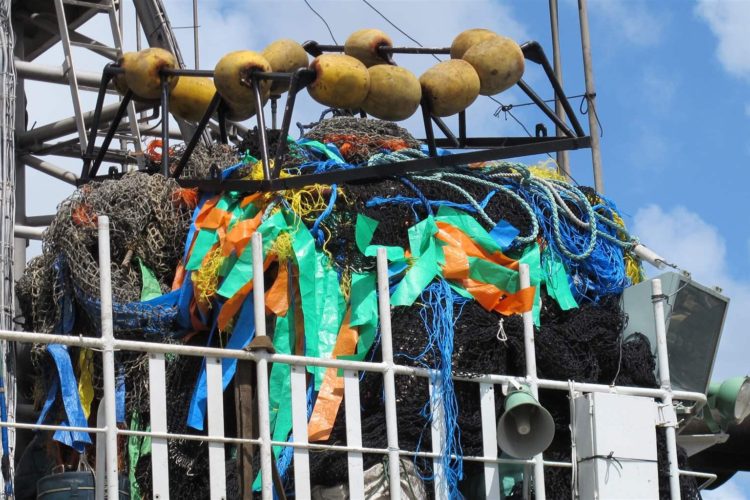 Fish aggregating devices, along with material to make them, are stacked on a purse seine vessel in Micronesia. Credit: The Pew Charitable Trusts
Share List

Managers of the world’s largest tuna fishery—in the western and central Pacific Ocean—have a chance this year to improve the sustainability of how those fish are caught and should seize that opportunity.

At issue are fish aggregating devices (FADs), which are man-made rafts deployed by purse seine vessels to attract fish. For years, fishermen have observed that tunas gather under floating objects like seaweed or logs. Starting in the 1990s, fishing crews began making their own buoyant objects and deployed them in ever-increasing numbers. For purse seiners, which encircle schools of tunas within enormous nets, FADs have increased fishing efficiency and the amount of tuna caught. Today most FADs in the region are man-made and include plastics and other synthetic materials, with buoys that transmit location and, increasingly, the amount of tuna underneath a FAD.

Fifty-four percent of the tunas caught worldwide is from waters managed by the Western and Central Pacific Fisheries Commission (WCPFC), and much of that catch comes from the exclusive economic zones of eight Pacific island countries—which are also home to 90 percent of the FAD fishing within the WCPFC. Those nations are members of the Parties to the Nauru Agreement (PNA), which has strengthened fisheries management across the members’ collective waters.

To that end, PNA member countries have been at the forefront of efforts to better understand FAD fishing by collecting data from the transmissions of FAD buoys. According to a new analysis made possible by those efforts and prepared for the WCPFC’s Scientific Committee, an estimated 44,700 to 64,900 FADs are deployed within the WCPFC area, likely more than in any other ocean region.

The purse seine vessels using FADs primarily fish for skipjack tuna, the most common species used for canned tuna. But too few regulations are in place to ensure appropriate use of FADs, and their deployment can come at a cost to other species of tuna: Juvenile bigeye and yellowfin tunas, which also gather under FADs, can be caught before they reach reproductive age.

Juvenile catch isn’t the only concern: The webbing, nets, and ropes that make up FADs also entangle and kill sharks and turtles, and fishermen are not required to recover their FADs from the water.

A second recent scientific analysis, also made possible by the PNA data collection efforts and presented to the Scientific Committee, has estimated that at least 5 percent of deployed FADs wash ashore, and at least 26 percent of FADs could be considered “lost.”

A WCPFC working group is set to discuss FAD numbers, design, and possible management solutions on 3 October. Below are four recommendations the working group should send to the full Commission, which will decide at its annual meeting in December whether to increase regulation of FADs:

Taking these steps would be in line with the WCPFC Scientific Committee’s advice. In August, scientists on that committee expressed concern about the number of beached and lost FADs, and the potential impacts of high device densities on tuna populations. The committee recommended fewer deployments; use of biodegradable, non-entangling, and environmentally friendly designs; and better measures for control and retrieval.

Although fisheries managers worldwide have been slow to act, momentum is growing. Last year, representatives of FAD working groups from the Atlantic, eastern Pacific, and Indian oceans met to spark the beginnings of joint action. Their discussion was preceded by a meeting of a Global FAD Science Symposium, which included participants with expertise in WCPFC fisheries and identified proven and promising mitigation strategies, some of which the WCPFC working group is considering.

It is now up to the entire Commission to heed the advice of its own scientists, recognize the identified best practices, and adopt strategies appropriate to the western and central Pacific.  Compared to some of the other tuna regional fisheries management organizations, the WCPFC lags in the adoption of strategies to mitigate some of the impacts of FADs. Given the significance and size of its fisheries, the WCPFC has a chance to set a new standard for safeguarding the health and sustainability of tunas and the greater marine ecosystem.