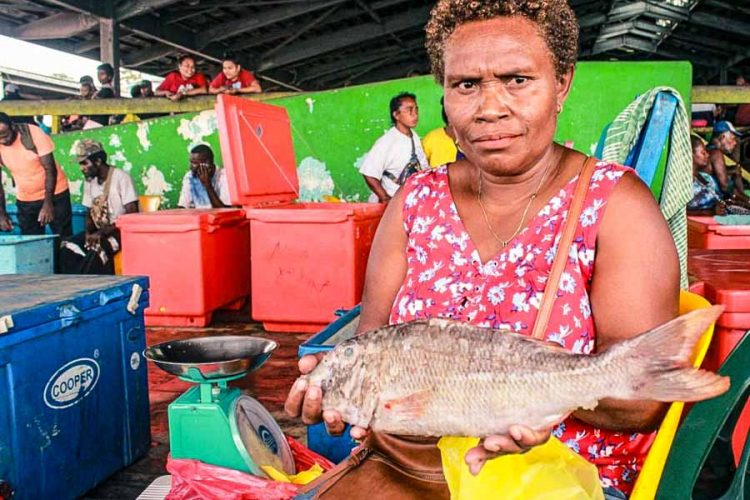 With the recent rise in popularity of the ‘salt fish’ trade in the Solomon Islands capital of Honiara, fresh fish and tuna vendors in the city markets are struggling to please their customers and earn enough income.

This is just one of an increasing number of challenges Honiara-based fish vendors have faced during the COVID-19 pandemic.

In recent years, it’s been observed that there is also a steady increase in fish prices, with small-scale fish markets storming the capital as competitors come from almost everywhere in the country. It is becoming more challenging for both fish sellers and consumers to find quality fish at a reasonable price.

One of the most popular and oldest fish markets in Honiara is the Vaivila Fishing Village Market in East Honiara. The other two fish markets are the Honiara Central Market and the White River Market in West Honiara.

Vaivila fish market is located along the coastline near the Vaivila fishing village, which was populated by people from the Lau and Langalanga regions of Malaita.

Village chief Robert Satu says his family were among the first settlers at the village in the early 1950s. Most of the first settlers were employed to work in a hospital established nearby – on a location that now hosts the Woodford International School, opposite the fishing village market.

Vaivila fishing village past and present

Today, ‘Fisheries’, as it is known, is a huge village with a roadside market. Chief Satu is a longtime fisher and fish vendor at the market. He said that selling tuna from catches outside the Honiara seafront between the 1960s and 1980s was totally different from its state today, as far as the prices of fish or tuna is concerned.

“From the 1960s through to the 1980s, the price of a single tuna or heaps of fish at the fishing village market was as little as 5 cents up to $5.00. The coastal areas of Honiara from White River up Tenaru in Central Guadalcanal was rich with marine resources, especially fish,” Chief Satu said.

“During our fishing trips in the 1960s, it took us only one drop of the fishing net and you’ll get a canoe filled with fish for marketing or consumption. In those years, the tuna or fish stocks are high and my life as a fisherman is very easy. Compared to nowadays, there are very low fish stocks along the Honiara coastline, due to the increase of settlers as a result of the growth in the city’s population.”

Chief Satu blames overfishing plus environmental pressure such as the change in coastal environments and pollution as the main cause of damage to the fishing grounds outside Honiara.

Another fish vendor at the Vaivila Fishing Village Market, Alick Kabolo, said, “For those of us that are residing along these shorelines, it is a major challenge for us because we have to go further out into the ocean to trawl. We never rely on others to bring fish for us to sell, but we ourselves go out to fish and come back to trade at the market to sustain our daily needs.

“Back then, when I completely sold my fish catches, it is the happiest day of my life because I know that my hard work pays off as a fisherman, unlike others that are relying on other fishermen to fish for them.”

Mr Kabolo said that today, with a rise in the cost of living in Honiara city, these fishers would worry about the cost of getting their catch to market.

“All this spending can be very expensive. They still need to make profit from their sales to recover their expenses.”

The rise of the salt fish trade

Salt fish become popular in 2006–2007. Since then, its fortunes have fluctuated, and there have sometimes been concerns whether it was safe to eat. But it has been rising in popularity again as people feel the economic bite of COVID-19 restrictions.

‘Salt fish’ refers to frozen, salted fish offloaded from purse-seine vessels during transhipment at the Honiara port. Most of these vessels fish in local waters or the exclusive economic zones (EEZs) of neighbouring countries.

The fish offloaded are species that aren’t the target, but are caught accidentally (as bycatch) during tuna fishing, and tuna that has been damaged and is no longer marketable elsewhere. These fish don’t go to waste, however, as locals sell them in the fish markets.

The fishers of the fishing village live with the everyday struggles of spiralling fishing costs and finding enough fish to sell. The city-based fish vendors live with the struggle of relying on a supply of fish from the purse-seine vessels transhipping at Honiara. Some have resorted to the National Fisheries Development-owned fishing vessels that supply tuna for the SolTuna cannery at Noro, in Western province. They then transport the tuna and bycatch fish to the markets in Honiara.

However, the problems of the two groups are intersecting. The rise of salt fish trade is becoming a concern for the hardworking fish vendors at the Vaivila Fishing Village Market due to increase demand as a result of its cheaper price.

Sheroll Galo and John Kennedy were longtime salt fish vendors in Honiara. Both said when they started selling fish, their startup prices ranged from $10 to $200 (Solomon Island dollars), depending on their size.

“Most of us vendors in Honiara are relying on the purse-seine boats and passenger ships that are arriving from Noro every week. That said, we make more profits than those that are selling fresh fish at the market,” Mr Kennedy said.

Despite the restrictions and lockdowns of the COVID-19 pandemic, the salt fish trade at Honiara’s Central Market has continued, as there has been an increase in the number of vessels transhipping at Honiara in recent months. This has been since the introduction of regional protocols that have allowed tuna fishing to resume in a COVID-safe way.

COVID-19 and the challenges of fish trading

However, despite this, COVID-19 is affecting most of these fish vendors.

Small businesses have been particularly hard hit. When Honiara was declared an emergency zone in April 2020 and a state of public emergency was imposed, the vendors were told not to engage in any fish vending business in the capital.

During the state of emergency, domestic ship operators and purse-seine vessels were warned not to provide fish to market vendors. The only vendors who continued with their businesses were those who brought in fish stocks in chiller boxes.

One of those is Emily Kawa. She is a frequent vendor at the Vaivila Fishing Village Market and Honiara Central Market.

“From four ice-chiller boxes, I’ve reduced it to two now. This is because not many people are buying fish at the Honiara Central Market,” Mrs Kawa said.

Another fish vendor hit hard is Brendale Bilusu, who hails from the famous Marovo Lagoon in the Western Province. He runs a fishing business. His target market is the Honiara Central Market.

Before COVID-19, Mr Bilusu used to enjoy the money he earned from selling fish. The money he raised supported his immediate and external family members. He said that, even in better times, running the fish business was not the easy feat others might think it is.

“There are lots of expenses you have to meet. These include hiring transport in Honiara, buying ice blocks, shipping freights for the ice-chiller boxes, as well as fuel expenses for outboard motor to go around and buy fish from fishermen and women in the villages along the Marovo Lagoon,” Mr Bilusu said. Life had become much tougher in the past few months.

“So it’s quite a tough business. But you know what, if it takes you more days to sell your fish, your expenses will also increase. You will need to pay for market fees as well as ice cubes to maintain the quality of the fish,” Mr Bilusu said.

The other problem he has encountered since the rise of the COVID-19 is slowing sales, which means he is left with fish for four to five days, during which time it deteriorates. To sell the fish while it’s at its best, he has had to lower his prices in order to attract customers.

“Right now, I am also struggling to meet my family’s needs. I no longer received income like what I used to earn before this COVID-19. The COVID-19 is really affecting my small fish project,’’ he said.

Mr Bilusu said the government should come up with ways to help people like him who are struggling during the pandemic. As more Honiara-based fish vendors like him are missing out on the government’s economic stimulus package, Mr Bilusu’s only wish right now is for the COVID-19 to vanish so that his small income could regain its status.