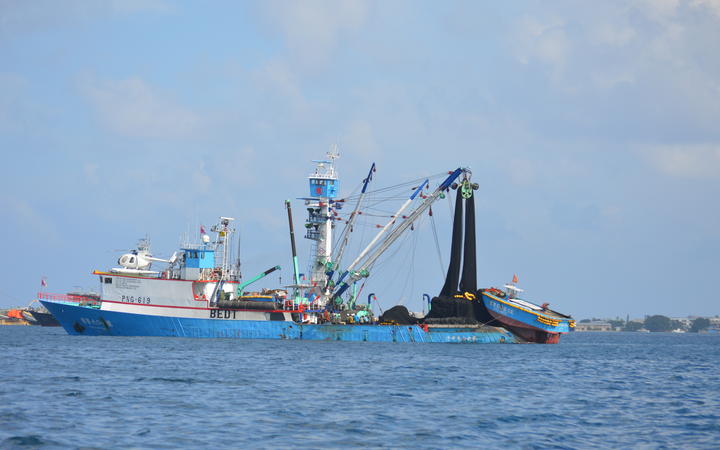 A Spanish contract pilot who flew a fish-spotting helicopter for a Taiwan-flagged purse seiner is now facing criminal charges in the Marshall Islands. Pictured is one of the Win Far tuna fleet purse seiners with a helicopter on the bow. Photo: Karen Earnshaw.

In late June 2020, a helicopter pilot working onboard the Taiwanese purse seiner Win Far 626 that was fishing in the Kiribati EEZ absconded with his helicopter and flew northward, landing on Nallu Island, Mili Atoll, in the Marshall Islands, after what was said to have been a two-and-a-half-hour flight. Mili is about 112 km south of the capital, Majuro, and roughly the same distance from the EEZ boundary with Kiribati.

According to an affidavit filed by the Marshall Islands’ Director of Immigration, “The pilot took off without permission and unannounced from the vessel.” The pilot, 39 year-old Brazilian and Spanish dual citizen Jose Eduardo Marinho Goncalves, later told authorities that he was tired of eating fish and rice almost every day and missed his family after a long period at sea and wanted to return home.

After being advised by Mili officials of the helicopter’s landing, the Marshall Islands Government dispatched its patrol boat, Lomor, and several government officials to Mili where Goncalves was arrested and brought to Majuro. He was charged with entry at an unofficial port of entry, entry without a valid visa, and failure to surrender any document.

The illegal entry offenses were particularly concerning to Marshall Islands officials, since the country has been in a border lockdown since late March 2020 due to the COVID-19 pandemic, has banned all entry of people into the country and so far, has not recorded any COVID-19 cases.

Upon arrival in Majuro, Goncalves was handed over to the Department of Health, was tested for COVID-19 and immediately went into quarantine at a facility that has been set up by the Department of Health during the pandemic. The Lomor crew and others onboard were also tested, with all tests including that of Goncalves returned as negative.  After completion of quarantine the pilot had his first appearance in front of the Marshall Islands High Court and was released on his own recognizance. Goncalves was represented by the Chief Public Defender who entered into negotiations with the Marshall Islands’ Attorney General prior to a plea hearing on 24 July.

At the hearing, the resident of Madrid, Spain apologized for his illegal entry and expressed his appreciation for the treatment he received while in the Marshall Islands. Also present at the hearing was Spain’s Honorary Consul in the Marshall Islands, Deborah Kramer. As part of a plea bargain between the Chief Public Defender and the Attorney General, Goncalves pleaded guilty to entry at an unofficial port of entry, which is a misdemeanor. The other two charges, entry without a visa and failure to surrender any document, were dismissed by the Attorney General. Chief Justice Carl Ingram gave the pilot a suspended sentence and said that if the court has not revoked probation and imposed a jail sentence at the end of six months, he would vacate the conviction from Goncalves’ record.

In what was a happy ending for Goncalves, he departed Majuro on 24 July on the United Airlines special monthly repatriation flight that had been recently introduced for outgoing passengers only. It is not known if either the company that owns the Win Far 626 or the owner of the helicopter, Guam-based Hansen Helicopters, are planning any further legal action against the pilot.  What is known is that at the end of July the helicopter was still stuck on Mili. Hansen, which also has a base in Majuro where they service helicopters used by the purse seine fleet in the Western Pacific, asked Goncalves to assist in retrieving the helicopter by flying it from Mili to Majuro before his departure, but he declined to do so. Whilst there are no indications in this particular case of human rights or labour abuse, this demonstrates the highly challenging nature of life at sea on distant water fishing vessels, even for those in higher-level positions.