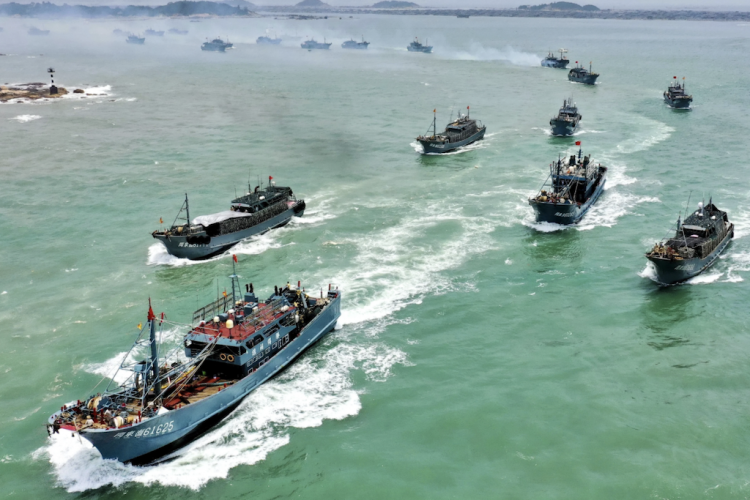 Around 260 Chinese fishing fleets were recently detected in the seas surrounding the Galápagos islands off the coast of Ecuador. The vast armarda of fishing vessels in the biodiverse Pacific islands has raised alarm bells over the fishing practices that conservationists say could severely damage the region’s protected marine ecosystem. Photo: www.greenqueen.com.hk

China’s distant-water fishing fleet is in the headlines once again. In a story hitting the international media, a flotilla of an estimated 243 China-flagged tuna longliners, squid boats, supply vessels and reefer carriers was fishing on the border of the Galápagos Islands EEZ in the eastern tropical Pacific.

The environmental concern is sharpened in these waters because the Galápagos marine reserve has a concentration of shark species, including endangered whale sharks and hammerheads. Further, the Ecuadorian navy claimed that 149 of these boats had turned off their vessel monitoring systems.

China’s ambassador to Ecuador responded to queries raised by Ecuadorian authorities that “except for some delays or temporary loss of satellite signal, all Chinese ships keep operating and using monitoring systems normally,” adding that “China is a major fishing nation … and it is also a responsible fishing nation.” The spokesperson of China’s Ministry of Foreign Affairs subsequently announced that China would ban fishing near the Galápagos from September to November.

While the Galápagos incident garnered most attention, China’s fisheries expansion is touching all oceans, and most fisheries and markets. In Nigeria, Chinese investment of between US$1.5 billion and $2.5 billion is being poured into the creating of the Andoni Fishing Port and Processing Zone. The complex is anticipated to use Nigeria’s influence with other countries in West Africa in to create a regional hub for the landing and processing of a wide range of species including mackerel, herring, tuna, and crustaceans. Critics argue that fisheries in West Africa are already at capacity.

In Europe, Shanghai Kaichuang Marine International has announced a US$36 million investment in a new tuna processing plant in Spain under its Albo subsidiary. Shanghai Kaichuang Marine International is currently an enormous commercial presence in China’s seafood markets, especially for mackerel, tuna, fish fillets and krill, but only has a very small export presence and is looking to expand internationally. In the Pacific, China is building ever stronger ties with the Solomon Islands since ‘the switch’ in diplomatic relations from Taiwan, including proposed tuna industry investments.

More broadly, and perhaps driving these dynamics, is that China’s distant water fishing fleet is between five to eight times larger than previous estimates. Recent research by the UK’s Overseas Development Institute identified 16,900 vessels, 90% of which are flagged by China. The study uses unique fishing vessel identifiers compiled in the Krakken database, which is reportedly the world’s largest database on fishing vessels.

The seemingly relentless expansion of China’s marine fishing industry continues to give competitors the jitters. Spain’s main tuna industry association – Organization of Associated Producers of Large Freezer Tuna Vessels (OPAGAC) – is arguing that crew conditions on Chinese fishing fleets is not only morally wrong, but gives their product an unfair competitive advantage as safety and working conditions are far laxer than those for EU boat owners.