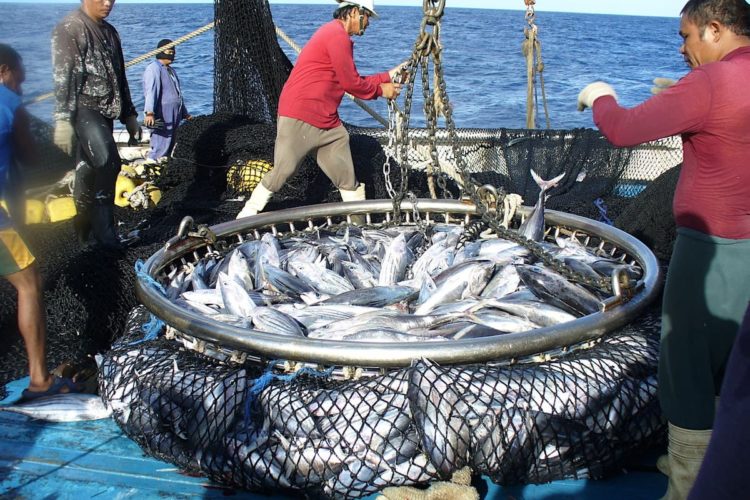 A catch of tuna is hauled in. Photo: Pacific Community (SPC).

The fishing effort in the tuna-rich waters of the Parties to the Nauru Agreement (PNA) does not appear to have been significantly impeded by the COVID-19 crisis, according to a report prepared by Brisbane, Australia-based resources consultancy MRAG Asia Pacific.

The report, which was completed in April, stated that travel restrictions as a result of the pandemic “has not resulted in a widespread decline in fishing effort”.

The 32-page report looked into the changes in fishery and market dynamics of the PNA member states — including Federated States of Micronesia, Kiribati, Marshall Islands, Nauru, Palau, Papua New Guinea, Solomon Islands Tuvalu, and Tokelau — in the period of January to April 2020, as the pandemic took hold.

The report said that the information was drawn from PNA Fisheries Information Management System (FIMS), which focuses on the purse-seine fleet, and interviews with industry participants throughout the supply chain.

The FIMS data showed purse-seine fishing effort declined slightly in February 2020, compared to the period spanning November 2019 to January 2020, but has since recovered in March and April.

“Indications are that total effort (in exclusive economic zones plus territorial seas plus archipelagic waters) increased at a faster rate than effort solely in EEZs,” the report found.

“Preliminary data on levels of effort and the intensity of fishing effort (measured as the number of fishing days recorded per calendar day) in April 2020 are the highest in the 2019–20 period.”

It said, based on the data, fishing effort in March 2020, when port closures and quarantine restrictions were put in place, “was roughly similar to equivalent periods in March 2018 and 2019”. It also noted that overall fishing intensity in March 2020 was around 6.5% higher than the average for March 2018 and March 2019.

While fishing intensity is up, and the geographic location of fishing has changed, and the report found catch rates for January to April 2020 were 30% lower than in the same period in 2019. The report suggested a causal link between the lower catches and increase in fishing intensity — presumably a result of vessels taking longer to fill up in the low-catch conditions.

Fishing intensity increased in the EEZs of Federated States of Micronesia, Tuvalu, and Kiribati by 68%, 68%, and 12% respectively; with intensity lower in the high seas (14%), Tokelau, and also marginally in PNG.

“There is limited evidence from the data to indicate any of the variations are COVID related to date,” the report noted.

A steady decline in catch rates was seen at the end of 2019.

On 14 July, PNA CEO Ludwig Kumoru said fishing efforts have not slowed down despite COVID-19.

“Business hasn’t slowed down, uptake of days is still OK,” he said.

Mr Kumoru added that PNA needs to keep its operation going, but is prioritising the safety of its observers as well.

Although COVID-19 has not gravely affected the purse-seine catch, challenges are looming as a result of market uncertainty associated with the pandemic. The MRAG report noted that with restaurants in Asia and North America having periods of shutdown, or seeing dramatically reduced clientele, demand for sashimi tuna—– which is generally caught by the longline fleet — has dropped sharply.

And the report said the continued port closures and travel restrictions could eventually affect fishing efforts in the PNA, and also result in lower demand for fishing days under the Vessel Day Scheme (VDS).

The VDS is the foundation of the PNA’s economic revenues, bringing in about US$500 million (€438 million) annually to the PNA member states.

“It seems likely that, collectively, the impacts of these logistical issues, if prolonged, will have an impact on fishing effort (although at this stage it’s not clear how much, and the impacts do not appear to be evident in the overall effort figures to date). For those fleets/companies who purchased fewer days at the start of the year, logistical difficulties may ultimately influence demand for VDS days for the remainder of 2020,” the report said.

Forum Fisheries Agency Investment Manager Tony Sullivan said eventually the economic impacts of the pandemic will be felt in the fisheries industry. Those increased costs stem from higher freight costs, being forced to move exports overseas, employment costs, and other one-time expenses associated with the pandemic.

“What I don’t have available currently is what the actual economic impacts of this are, and it is probably a little bit too early to tell, but we know that it is going to be significant in terms of export revenue, employment, and businesses actually being able to sustain themselves through this pandemic crisis,” Mr Sullivan said.

This news story first appeared in Seafood Source on 20 July 2020.