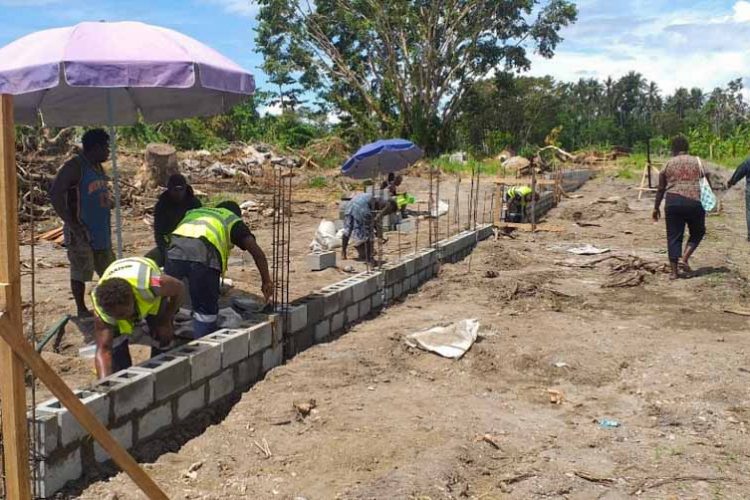 Building the perimeter fence of the Aruligo tilapia hatchery

HONIARA – A new tilapia hatchery in Guadalcanal is set to ease in-shore fishing activities and boost food security for the Aruligo community.

Construction of the hatchery should be completed by the end of the year. Aruligo is about 32 km north-west of the Solomon Islands capital, Honiara.

It is jointly funded by the Solomon Islands and the New Zealand governments under the Mekem Strong Solomon Islands Fisheries programme (MSSIF). The hatchery will improve food security, help reduce pressure on existing in-shore fisheries, and help rural people, particularly youth, participate in the productive sector.

The New Zealand Government said the Aruligo hatchery project was one of the most important projects of MSSIF.

“We’re excited to see the progress made by the Ministry of Fisheries and Marine Resources (MFMR) at the Aruligo Tilapia Hatchery,” the New Zealand High Commission’s Office in Solomon Islands said in a statement.

The coronavirus (COVID-19) pandemic has slowed progress on the construction of the hatchery. However, work is continuing.

“Despite challenges caused by COVID-19, the contractor has made excellent progress towards completion of Phase 1 of the project,” the High Commissioner’s office said.

“We think the office building and ponds look fantastic! We expect completion of Phase 2 – fencing, utilities, and further pond construction – within the next few months.”

The first phase includes a laboratory, an office, a covered area of tanks for growing juvenile fish, and a perimeter fence.

MSSIF has supported the MFMR for the past decade.

The fisheries ministry hopes the project will provide much-needed facilities to import tilapia and to make an improved strain available to rural fish farmers. This is driven by MFMR’s policy to develop an aquaculture sector that supports rural livelihoods, food security and economic returns.

MFMR said the COVID-19 pandemic had done little to dampen the spirits of the group of dedicated government officers and contractors who continued to work on construction activities at the hatchery. Ministry staff conducted a site visit in April to see first-hand the stage the project had reached and were satisfied with progress.

The Ministry of Fisheries is developing the Aruligo site into a national aquaculture centre. On 9 June, it was officially handed over to the ministry.

During the handover ceremony, the ministry’s Under-Secretary of Corporate Service, Patterson Lusi, appealed to the Aruligo people to look after the property.

“As we gather in this magnificent building and the first set of ponds that we have here, it demonstrates a true commitment that we all have in making sure that there is a national tilapia hatchery project to be built here,” Mr Lusi said.

“I also want to appeal to people around here to look after the property. Remember the maximum benefits of this project will pour out to the communities in and around this area.

“The first species of tilapia will be from here, the first training for farmers will also be done here, so please look after our facility well.”

Speaking at the ceremony, the Senior Fisheries Officer of Guadalcanal Province, Willie Kokopu, said the division was proud to be part of the development of the centre.

Locals employed in building the site

Part of the centre sits on a World War 2 site, and early work involved clearing unexploded ordnance from the area. Locals were employed to help with this work, and the ministry said that more locals would be employed on Phase 2 works.

An elder was reported as saying that the project would “be a magnet for other proposed development in region”.

It is anticipated that construction will be completed this year. The hatchery should become fully operational once Nile tilapia are imported in 2021. They will be dispersed to farmers in late 2022 or early 2023.

Aquaculture is relatively new in Solomon Islands. MFMR’s Aquaculture division expects tilapia to contribute to food security and rural livelihoods. So far, the fish has only been used for stocking natural bodies of freshwater bodies to increase inland fishing production.