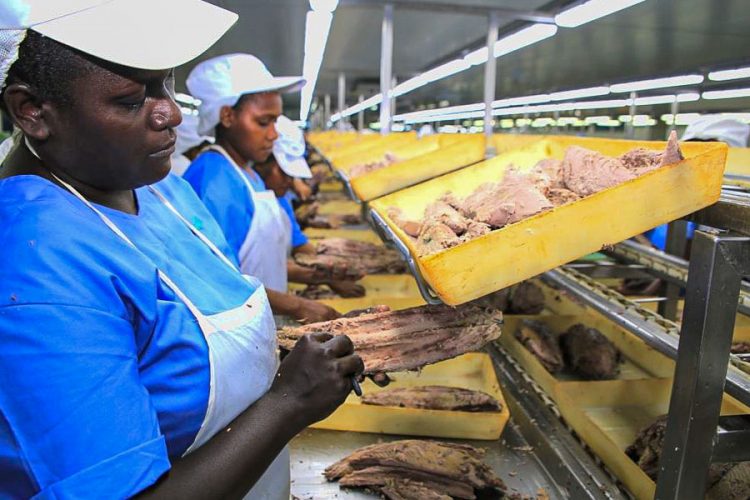 Most businesses in Solomon Islands have scaled down operations as more workers are being laid off. Photo: Lachlan S. Eddie.

HONIARA, 17 April 2020 – Solomon Islands is facing an economic crisis: with the onset of the global coronavirus pandemic, the prognosis for the near to medium term is not looking good, says iTuna Intel CEO and founding director of Pacific Catalyst, Dr Transform Aqorau.

“The only revenue going to be coming into the Treasury is through the sale of fishing vessel days (VDS) to foreign fishing vessels and a little from existing logging operations. The latter are at levels that are much lower than 2019 but the forecast is not really bright,” Dr Aqorau said.

“With regards to tuna revenues, we have to keep our fingers crossed that this natural phenomenon, which has seen tuna concentrated in our waters as a result of the shift of the warm pool, will remain in Solomon Islands over the next few years.”

In normal years, the Western and Central Pacific Ocean, of which Solomon Islands is a part, generates about $25 billion in revenue from tuna a year.

Tuna is the second largest revenue earner for Solomon Islands, behind the depleting logging industry. The tuna industry’s contribution to the Solomon Islands Government revenue on average is $260 million, of which 90% comes from fishing licences, the Central Bank of Solomon Islands (CBSI) has reported.

Dr Aqorau is a Solomon Islands fisheries law expert, and a former boss of the Parties to Nauru Agreement (PNA). He said that Italy and China, which were the two biggest importers of Solomon Islands tuna, had to date been the countries worst affected by the coronavirus.

“This will no doubt have a percolating effect on our major exports and, ultimately, revenue,” he said.

“No economy can survive without new money coming in, whether it is the form of donor aid or revenues from exports, as this will eventually impact on its ability to pay for import.”

The CBSI reported in March that the coronavirus would likely have a negative impact on the Solomon Islands economy. The spread of the pandemic and the considerable disruption it would cause would be exacerbated by the increasingly intertwined trade and investment relationships between China and its neighbours in the Asia–Pacific region.

The report stated that “being a small, open economy, the Solomon Islands will likely be adversely affected through the trade channel and thereafter the economy, and even fiscal operations”.

This month, CBSI reported that the speed of the spread of COVID-19 and the extent of the pandemic around the world meant that it had to revise its near-term growth outlook for the Solomon Islands economy.

The report said: “The downward movement in the global economy, as well ensuing public health measures and business closures, could see a significant decline in real GDP of between minus 3% to minus 5% in 2020. The current information at hand indicates that the economy is moving into a recession starting in the second quarter of 2020.”

The impact of COVID-19 was expected to affect almost all sectors of the Solomon Islands economy. Supply chains had been affected, with travel limits and disruptions to business activity.

More workers from the fisheries sector are being laid off as the pandemic’s grip on the Solomon Islands economy tightens. Soltuna, which employs over 1,000 workers, is one company that is scaling down.

Speaking in Parliament last Tuesday during a motion to extend the state of public emergency to four months, Minister for Finance and Treasury Harry Kuma said fisheries exports to Italy in particular had indicated a declining trend from the end of the first quarter of 2020 .

He added that prices were likely to fall by 5%.

“This will severely affect the operation of Soltuna and the employment of mainly women and girls in the Noro Cannery,” the minister stated.

“As you can imagine, fishing is directly impacted by the weather. Cyclone Harold has severely interrupted NFD’s fishing operations. Soltuna cannot operate without a steady supply of good quality tuna from NFD,” Mr Hamby said.

He went on to say that Trimarine had learned a lot from the COVID-19 pandemic. This was because Soltuna’s management and staff were almost all Solomon Islanders, and Soltuna could continue to operate during periods when expatriates had to evacuate back to their home countries.

For example, only one of the six tuna processing plants in Papua New Guinea was operating at the moment. The others had closed because they don’t have enough local management and technical expertise. Expatriates with those skills had gone home, Mr Hamby added.

“By contrast, despite COVID-19, Soltuna has continued to safely produce badly needed food for both the domestic and export markets.”

Dr Aqorau had projected that demand for canned tuna products would increase, including in China, where demand for fresh fish was declining as a result of the pandemic.

“It will be an evolution in China, but the tuna industry will be in for some very exciting times in the future,” Dr Aqorau said.

Frabelle Fishing Company in the Philippines is another company that is affected by COVID-19, as most ports in the Pacific are closed to transhipment.

The company’s CEO, Francisco Tiu Laurel, Jnr, said Solomon Islands was a major resource for tuna in the Western Pacific, as well as a major transhipment point. He said any restriction imposed by the government on fishing and fish transfers would surely affect the flow of goods to the markets.

“If we are operating unhampered, we are actually not losing so much, but if we go into port and we are made to wait for 14 days’ quarantine, we will be losing about US$10,000 per day in our operations cost while at port, plus the island nations will lose 12 of those 14 days in terms of vessel fishing days that fishermen are supposed to pay PNA,” he said.

“So, for every port call with quarantine, each boat loses about US$120,000, and the island nations will also lose about US$130,000 per day per vessel at port under quarantine.

“These are rough figures, but realistic,” Mr Laurel said.

He added that if Frabelle was not allowed to tranship in other ports, the company would have to run to ports that would allow them under certain conditions. But this would entail burning more fuel and losing more fishing days for both the fisherman and the island nations.

Marko Kamber, of Caroline Fisheries Corporation, has also stated that another major issue that island-based operators faced was the inability to replace crew because of the travel bans in place.

“Also many island ports do not allow disembarkation of crews to fly home,” he said.

Korea-based company Silla is also facing hiccups with their operations, with difficulties due to restrictions imposed by island countries despite a 100% fleet operation, says Operation & Sales Manager Sancho Kim.

Mr Kim said their operation was affected by the 14-day quarantine rule and some countries were closing their ports, both air and sea, to block COVID-19 transmission.

“It is obvious any one of those measures are affecting our operation negatively, causing delays in finding available ports to call for transhipment and maintenance operation,” Mr Kim said.

“It surely helped to improve the local economy to bring more economic activities into Honiara and also increase government revenue. However, Solomon Islands is also implementing a 14 days quarantine policy, which is forcing vessels to turn around to find other ports available to call.”