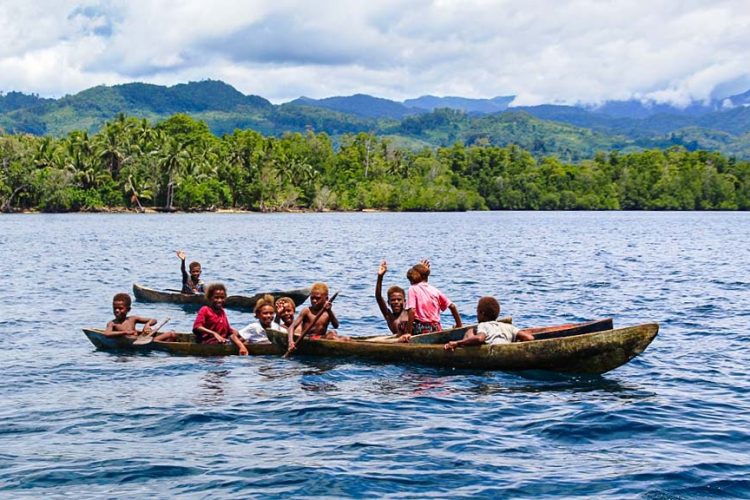 Children enjoying their afternoon at the project site in Bina Harbour. Photo: Wilson B. Saeni.

HONIARA, 27 March 2020 – Solomon Islands may soon have its second tuna cannery as initial work on the Bina Harbour project takes off.

The harbour project is a government priority for 2020.

The cannery is due to start operating in 2023. It is understood that the proposed facility would process 26,950 metric tons of fish a year. The project will be complemented by a large commercial wharf suited for international exportation, and a significant fuel depot to support the fishing fleet that will provide fish for the cannery.

The project has faced several challenges from different sectors over the past years during the early planning phase. Now, a cross-sectoral approach with a strong notion of “working together” with all relevant stakeholders is being undertaken.

This week, the Democratic Coalition Government for Advancement (DGCA) said it is committed to the successful implementation of the Bina Harbour project in Malaita Province.

A statement from the Prime Minister’s press secretariat said that this commitment was evident, as significant progress had been made so far.

“DCGA is serious in taking on board the many challenges faced by past successive governments in moving this national project forward,” the Prime Minister’s Office said.

Currently, consultations are being held between the Office of the Prime Minister and Cabinet (OPMC), the World Bank Group, International Finance Corporation (IFC), the Ministry of Fisheries and Marine Resources (MFMR), Malaita Provincial Government, and the resource owners.

While the MFMR remains the leader and focal point of the national project, consultations to progress the project now involve all sectors and parties directly and indirectly related to it.

The government believes the positive impacts this national project will have on the country is huge.

When operational, the tuna factory is expected to employ more than 1,000 employees.

“Ideally, we want our Pacific athletes attending the games in 2023 to eat fish products produced in Bina,” the statement said.

“Apart from employment, the positive trickle-down impacts of this factory are that many local businesses and local farmers in the country would benefit in supplying food produce and basic needs to the factory and its employees.”

Bina Harbour in Malaita Province was earmarked by the national government in its priority projects to establish a fish-processing factory, but land issues have delayed progress on the project.

Former Minister for Fisheries & Marine Resources (MFMR) John Maneniaru said land disputes over the proposed site in Bina Harbour had been dealt with by the High Court.

The High Court ruling in 2017 has settled the land issue, clearing the way for the government to pursue the project.

During his term as the minister, Mr Maneniaru said the ministry took the lead in the work on the project and had identified two plots of land on the site that should cater for developing the infrastructure needed.

It was obvious that the ministry had tried everything to progress the project, one of which was finding the best ways to accommodate all land-owning groups as the number of tribes claiming ownership keeps changing. However, in 2017 a milestone was achieved with landowners, when plots of lands and their rightful owners were identified.

In May 2019, a reconciliation ceremony was organised between the national government, Ministry of Fisheries, Malaita Provincial Government, and the resource owners of Bina in West Kwaio.

The reconciliation took place in West Kwaio, where representatives from the four groups signed a memorandum of understanding (MOU) to allow Bina Harbour development to go ahead without any further disputes.

The Member of Parliament (MP) for West Kwaio, Mr Titus Fika, thanked the landowners for signing the MOU, and described the event as a welcoming sign for development in his constituency. He said the MOU would allow Bina Harbour development to go ahead, and any dispute claims would be solved outside and would not disturb the development.

“I want to thank the national government for taking a leading step by revisiting the Bina Harbour project,” Mr Fika said.

“I think the government has demonstrated willingness to continue to develop Bina Harbour.”

The West Kwaio MP admits that he admires the way the current government is taking a leading role in ensuring the Bina Harbour project rolls on.

While he called on his people of West Kwaio to respect the MOU to allow development to continue, he also encourages the government of the day to continue to push behind the project to see it fully develop.

In November 2019, a hydrographic survey was conducted to determine the depth of the harbour.

The survey, which was conducted by the Australia navy, is a major step in the development of Bina Harbour project. The survey is vital to gauge the depth of the water so that action can be taken on other considerations needed, especially the size of ships and the depth of their hauls.

Through its navy, the Australian Government is helping to map the underwater topography to determine what needs to be done to satisfy international maritime harbour requirements.

The Solomon Islands Deputy Prime Minister Manasseh Maelanga said that the national government is doing everything it can to get the harbour project operational. He thanked the Australian Government for supporting the project and assured it that the DCGA government is committed to pushing the project forward.

The Deputy Prime Minister also took time to thank the people and the trustees of Bina land for their cooperation, and encouraged them to keep up the good work to see the project through.

MFMR’s Nesto Ghiro reiterated to the people of Bina and Malaita Province that the government is committed to the project.

Meanwhile, Malaita Province Premier Daniel Suidani said that his government was looking forward for the completion of the project, and he whole-heartedly thanked the Australia Government for stepping in and moving the project forward.

“This is welcoming news to my people of Malaita province, and I must thank the national government for its support towards the project and I urge the government to follow through on its promise and commitment to the people of Malaita,” the Hon. Suidani said.

“The province has been duly informed that the New Zealand Government has been helping out with the project alongside Australia. IFC and USA are also expressing their willingness to support the project. This is good news to the most populated province of Solomon Islands,” he said.

During a meeting with local journalists last September, the United States said it was also considering working in Bina Harbour with other donor partners under the USAID program.

When confirming her country’s assistance, USAID Deputy Assistant Administrator Ann Marie Yastishock unveiled some infrastructure development the US would step in to fund.

“We are looking at developing the Bina Harbour area and also the possibilities of building the wharves in Bina Harbour,” she said.

Ms Yastishock said that, under the program, USAID would be looking at possibilities to provide clean energy that ensured rural areas far from the energy grid would also have access to energy.

“Some other areas will be the constructions of schools and health centres, as well as some areas on clean water supplies,” she said.

Ms Yastishock said that these were types of “soft” infrastructure because they had to understand those things like maintenance issues and how to procure them online.

“The issue here is we are looking at the governance type of issue,” she said.

Early this year, a team from the IFC, the private business arm of the World Bank, made a historic visit to Malaita, during which they met the premier and officials. The team which of six is putting together a project proposal to attract the investor best suited to the Bina Harbour project.

ICF, a triple-A rated organisation, has continued to play an important role in the project since signing an agreement with the Ministry of Fisheries last yearn.

It is also welcome news for Malaita that IFC will take steps to invest in the project itself.  This move is cordially welcomed by the Premier and his provincial executive because of its potential to grow the provincial economy.  IFC says it will ensure that the Bina tuna-processing plant is subject to the best global practices, and that the investor selected would be among the best in the world.

The aim is to meet international standard requirements, and that needs a lot of careful work on the part of IFC. The targeted market would be the European Union (EU). The province and IFC are well aware of the EU’s market, which includes requirements for high standards of production, processing and hygiene.

Premier Suidani said that the province was ready to assist in whatever way it could to make sure the project was up and running for the betterment of the people of Malaita and Solomon Islands.

The Malaita Provincial Government (MPG) noted that the World Bank-funded road-improvement project now set to roll from Gwaunaru’u to Bina would boost the Bina Harbour project via improvements in accessibility and movement of materials and people alike.

“With the involvement of IFC, MPG is very confident that the development of the Bina Harbour tuna-processing plant is in good hands,” Premier Suidani said.

“The spin-off from the project would surely bring development to Malaita Province.”