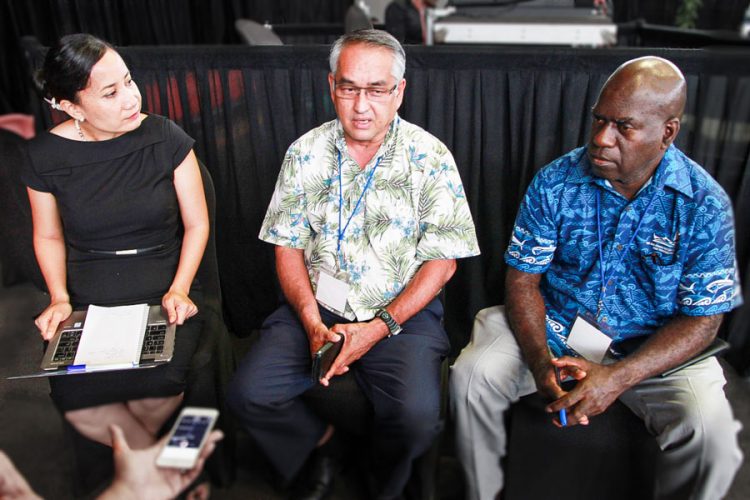 The Tuna Commission negotiations enter the final day today with the Pacific country bloc optimistic of good outcomes on its priority issues.

The Director-General of FFA, Dr Manu Tupou-Roosen, said, “We are feeling very positive at this stage. We are feeling confident, but you never know until the last day.”

Top of the priority list is the push to adopt a climate-change resolution that was tabled on the first day. Signs are encouraging as questions on the text initially focused on actions by members and the Secretariat, and have been successfully navigated in accordance with the mandate of the WCPFC. The formal discussions take place today.

Chair for the Pacific’s Forum Fisheries Committee, Mr Eugene Pangelinan, said, “I am a bit more optimistic than what I was on the very first day.”

“The initial discussions were somewhat concerning, but this is a negotiation and if we are to get an agreement we will need to exercise some flexibility. Given the Convention and the objectives of the WCPFC (Tuna Commission) and what we’re trying to achieve, this is turning out much better than I thought.”

Dr Manu Tupou-Roosen said of the big emitters and other member countries from outside the Pacific, that “they have been consulted here by our members and have been supportive of this resolution”.

“It has come down to drafting, making sure that what is included doesn’t undermine any national positions being put forward at the COP25 climate-change meeting in Madrid, Spain. So there is a real big effort to get this resolution through.”

Mr Pangelinan said that, if there agreement were reached on a final resolution today, “that would be a great outcome for FFA members in terms of getting special attention within the WCPFC effort about climate-change issues, and fisheries in particular”.

It will also support further development of the science in the area, allowing the Tuna Commission to make informed decisions on the impacts of climate change and how the it can respond to those impacts.

The members of the Parties to the Nauru Agreement (PNA) fully support the resolution and the need to address the impacts of sea-level rise on the maritime boundaries of Pacific countries.

The Chief Executive of PNA, Mr Ludwig Kumoru, said, “Climate change affects all of our members. Issues such as maritime boundaries come into play when you talk about climate change. For PNA, one of the issues that is not mentioned specifically is sea-level rise and how it affects the EEZ boundaries.”

The major potential impact of changes to maritime boundaries are economic.

“They would lose their economic means,” Mr Kumoru said. “That is why we are making sure that, through FFA, through the region, it goes through to the United Nations, that our boundaries are agreed. Then even if the Pacific islands disappear their boundaries are there and they still get money [earned] from within those boundaries.

Other Pacific priorities on the table are:

The 16th annual meeting of WCPFC is expected to close today, Wednesday, 11 December.

FFA assists its 17 member countries to sustainably manage fishery resources that fall within their 200-mile exclusive economic zones (EEZs). FFA provides expertise, technical assistance and other support to its members who make decisions about their tuna resources and participate in regional decision making on tuna management.

The WCPF Convention draws on many of the provisions of the UN Fish Stocks Agreement [UNFSA] while, at the same time, reflecting the special political, socio-economic, geographical and environmental characteristics of the western and central Pacific Ocean (WCPO) region. The WCPFC Convention seeks to address problems in the management of high seas fisheries resulting from unregulated fishing, over-capitalization, excessive fleet capacity, vessel re-flagging to escape controls, insufficiently selective gear, unreliable databases and insufficient multilateral cooperation in respect to conservation and management of highly migratory fish stocks.