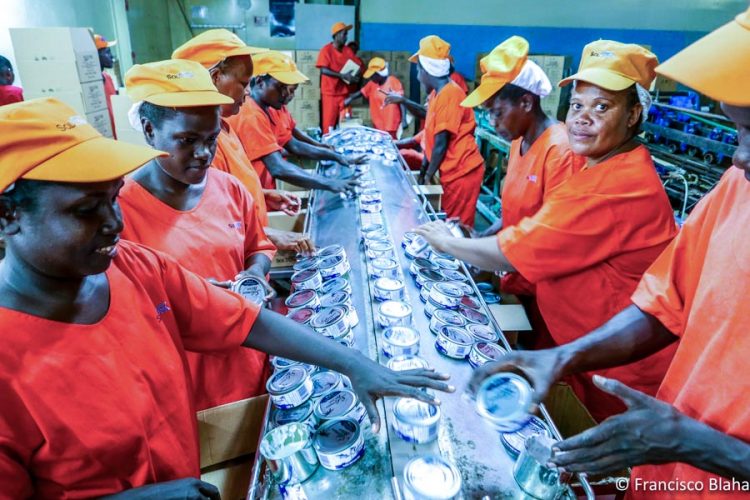 On the line at a Pacific Islands tuna cannery. Photo: Francisco Blaha.

Fish migration due to climate change has impacted the supply of albacore tuna in Fiji, bringing the supply down and leading the Levuka factory of the Pacific Fishing Company (PAFCO) to reduce its operations to a four-day work week to maintain economically viability.

Fiji’s government-owned PAFCO is looking for alternatives to maintain financial stability in light of the albacore tuna shortage. PAFCO chair Ikbal Jannif told local news organisation FBC that the shortage of albacore has been an ongoing issue, and for the tuna cannery to operate fully again there needs to be around 23,000 metric tons of albacore tuna to process.

The crisis has brought the supply down to 16,500 metric tons, impacting the economy of Levuka. PAFCO is the biggest employer of the cannery in Levuka, with 600 full-time workers and around 400 part-time workers.

To supplement the shortage, PAFCO last week bought in around 220 metric tons of skipjack tuna in lieu of albacore.

Fiji Fisheries Minister Mr Semi Koroilavesau, who has been in Port Moresby attending the 16th Western and Central Pacific Fisheries Commission (WCPFC), highlighted climate change as impacting the supply and affecting the migratory pattern of the albacore tuna, which is more plentiful in other Pacific island countries.

Mr Koroilavesau said that discussions are being held with the neighbouring countries in the north to allow their fishers to access tuna resources in the high seas and in neighbouring exclusive economic zones (EEZs) at a lower fishing-day fee. This way, Fiji and PAFCO will have enough resources to keep the cannery in operation and avoid further cuts in working days, the minister added.

Fiji fisheries officials have taken opportunity to urge a concession and reduced price for fishing days to enable PAFCO to fish in the waters of the Parties to the Nauru Agreement (PNA), specifically in Solomon Islands, Vanuatu, and Kiribati. The PNA group controls waters in which more than 50% of the world’s biggest tuna canning species – skipjack – is caught.

“Possibly give us some preferential fee, because we have come back on Fiji. That is the angle we are taking, we are looking into friendly relations that we have with our northern neighbours, we ask them to give us leeway,” Mr Koroilavesau told SeafoodSource.

Mr Koroilavesau said Fiji wouldn’t want to be charged the high fee that PNA imposes on international fleets, given a shortage of fish in the EEZ.

He added that, due to warming ocean waters, the fish have migrated to the east, benefiting Tuvalu and Kiribati, while Samoa, Tonga, and Fiji “have very little”.

Mr Koroilavesau said the primary aim was to increase the tuna supply for processing, and an alternative was to negotiate arrangements with other nations in the Pacific.