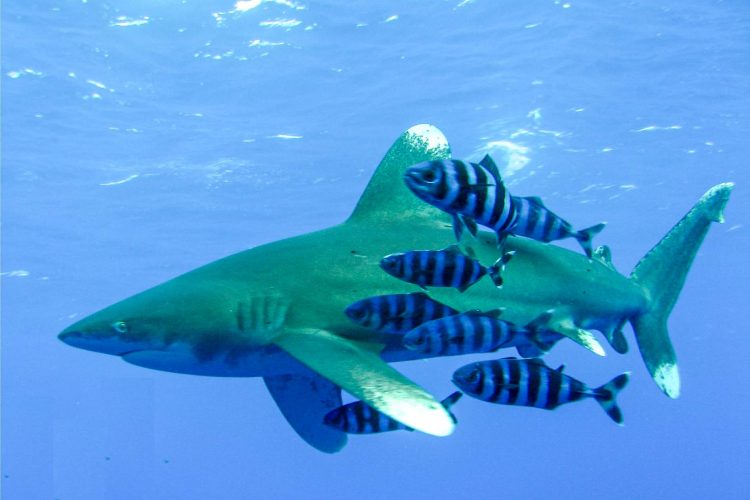 PORT MORESBY, 10 December 2019 – Fishing nations must adopt a suite of measures to reduce deaths of oceanic whitetip sharks, according to the Pew Charitable Trusts.

Pew is one of a host of countries and organisations attending the most important fishing talks of the year, the 16th annual meeting of the Western and Central Pacific Fisheries Commission (WCPFC).

Fishing gear such as wire leaders and shark lines must be banned, safe-handling techniques used to return snared sharks to the wild must be improved, and coverage of independent observers tasked with data collection must be increased, PEW says.

The 2019 stock assessment commissioned by the WCPFC, a multi-national regulatory body, indicates that oceanic whitetip sharks are in peril and will become extinct if overfishing continues.

The WCPFC is holding its week-long annual session in Port Moresby Papua New Guinea until 11 December.

Earlier this year, the Scientific Committee of the WCPFC, at its meeting SC15, recommended actions to lessen the numbers of sharks that are caught, and to improve safe handling and release practices.

“Prohibiting the use of wire leaders and shark lines would cut fishing-related mortality,” Pew said in a statement.

“Better safe-handling techniques, such as cutting the trailing gear as close to the hook as possible and keeping the shark in the water alongside the vessel, are also needed to further reduce mortality.”

The latest science showed that the population of oceanic whitetips has declined by around 95%, according to environmental organisation WWF.

The analysis commissioned by WCPFCC “concluded that oceanic whitetips would go extinct in this vast expanse of the Pacific in the long-term at the current levels of fishing”.

The leader of Oceans section of WWF International, John Tanzer, said, “It is unbelievable that a species that could be counted in the millions in the past is now facing extinction in the Western and Central Pacific Ocean, an area covering almost 20% of the Earth’s surface.

“Urgent action is required to start rebuilding the oceanic whitetip population and to ensure that no other open ocean shark or ray ends up in such a disastrous position in the first place.”

Meanwhile, Indonesia has proposed a measure to improve data collection for sharks as bycatch in tuna fisheries.

The proposal notes that the commission needs to improve:

The Western and Central Pacific Tuna Programme Manager at WWF, Bubba Cook, said he is optimistic that with several members of the Tuna Commission pushing for comprehensive shark-management measures, there is indication that a policy will be put in place in this year’s fisheries meeting.