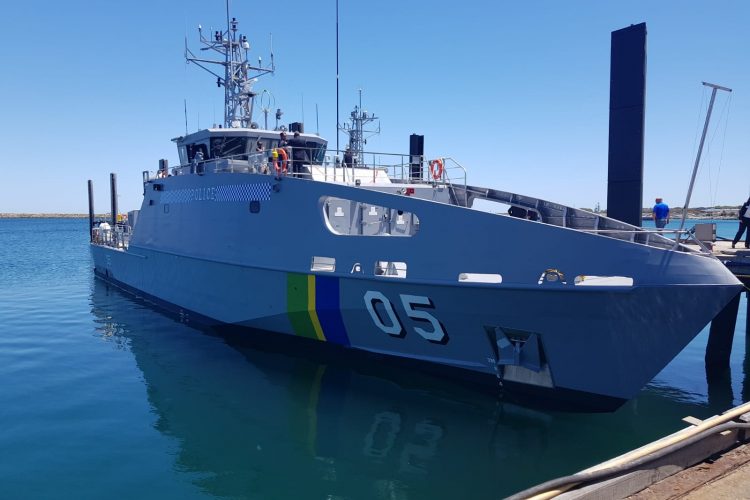 HONIARA, 15 November 2019 – The arrival of the new Guardian class patrol boats for Solomon Islands will greatly improve the capabilities of the local police force to serve the nation, secure its borders, and protect its people and resources, says Prime Minister Manasseh Sogavare.

Mr Sogavare made the remarks when he received the new Guardian class patrol in a ceremony at the Austral Australia Shipyard, Henderson, Perth, Western Australia, on Friday, 8 November.

The vessel is the first of the two new Guardian class patrol boats for Solomon Islands, donated by the Australian government.

“On behalf of the government and the people of Solomon Islands, I am deeply honoured and privileged to officially receive the new Guardian class patrol boat from the government and people of Australia to replace the first of our two aging patrol boats that had served my country well over the past three decades. We are truly grateful,” Mr Sogavare said.

“This ceremony demonstrates the depth and breadth of the friendship and partnership between our two governments.

“This relationship has endured and strengthened over time, embodying our shared values and mutual respect for each other.”

The patrol boat is part of the broader Australian Pacific Patrol Boat Program. The program demonstrates Australia’s interest in and commitment to assisting its smaller Pacific Island neighbours to step up and increase their respective capabilities to provide security for their countries.

“Solomon Islands is honoured to be part of this excellent program,” the Prime Minister added.

The Australian Government has been providing support to Solomon Islands through the Defence Cooperation Program (DCP) and the Pacific Patrol Boat Program for more than 30 years. This reflects the true friendship and ever deepening partnership between our two countries over many years.

According to the Solomon Islands Prime Minister, the ceremony is symbolic and historical, as it testifies the success of the bilateral and security collaboration between Australia and Solomon Islands.

He said the new Guardian class boat is bigger, faster, and more capable than anything that came before it.

“It will greatly improve the capabilities of the RSIPF [Royal Solomon Islands Police Force] to serve our nation, secure our borders, and protect our people and resources.

“This new vessel will help our police and related government agencies to carry out essential national security and humanitarian tasks.

The PM added that the new Guardian class vessel is an impressive feat of modern engineering which will take Solomon Islands to new heights in protecting its waters.

In a Police Statement, DC Mangau said the new boat is purposely to conduct maritime surveillance and enforcement operations like fighting illegal fishing, search and rescue for distressed boats, VIP escorts, and other border operations.

Mangau also thanked the government and people of Australia for the gift of the new patrol boat.

“I would also like to thank the Australian Defence Program and Australian High Commission in Solomon Islands for making possible arrangements for the official handing over ceremony held in Perth, Western Australia, last week.”

RSIPF maritime officers, who are currently being trained on board the RSIPV Gizo in Perth, will sail the patrol boat to Solomon Islands and expected to arrive in Honiara by the middle of next month.

A formal welcome ceremony is being planned for the arrival of the new patrol boat to its new home, the Aola Patrol Base in Honiara.