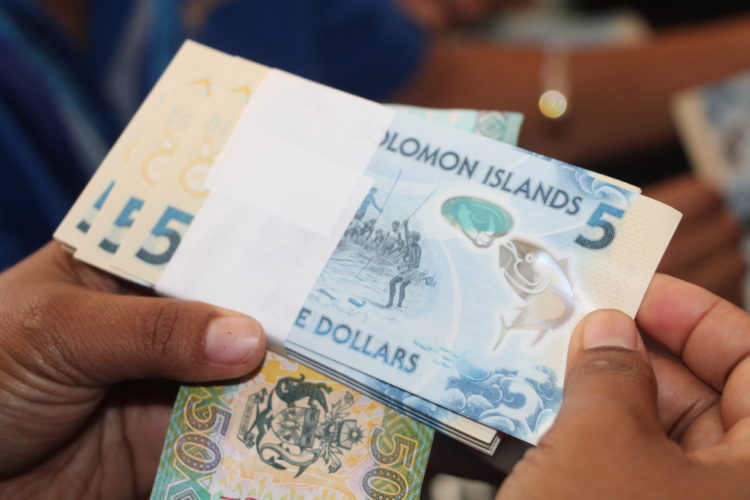 (HONIARA) The tiny Melanesian state of Solomon Islands now has a new polymer $5 banknote, which was officially released earlier this month.

It was launched on the International World Tuna Day (WTD) 2019, and one of the special features on the new $5 banknote is a ‘Tuna’.

The major design themes of the new note focus on creating a sustainable and responsible fishing industry, according to Daniel Haridi, Chief Manager – Currency, Banking, and Payments Department

The new note emphasises the importance of providing long term economic security for the nation, as well community and social cohesion.

“The design features a yellow-fin tuna and a traditional fishing hook on the front of the note to signal the importance of sustainability.

“On the reverse side, we see a traditional spear-fishing scene that highlights the need to preserve and promote community activity as we move into the future,” Mr Haridi said.

Mr Haridi also stressed that the note handled challenges of cash usage through more than 900 islands and was the result of a comprehensive currency review conducted by the bank that revealed an opportunity for improved performance on the five-dollar note.

“Given the humidity and the common practice of crumpling banknotes, the review concluded that polymer would better serve the community for use as a market note due to its durability,” said Mr Haridi.

As a symbol of progress for the Solomon Islands, Mr Haridi also announced that the new polymer banknote will be the first circulating note in the world to include a new ultraviolet (UV) ink security feature.

“This feature can only be seen under UV light, and consists of two UV inks which are red and yellow on this note, that are also combined to create a third colour which is orange.

“The visual effect is stunning and authorities checking the new note under UV light will be able to instantly authenticate the note,” said Mr. Haridi.

“It should remind us of the important role that the fishing industry contributes to economic growth in SI.

“You will note that the yellow fin tuna is portrayed in the clear window on the note. On the reverse side of the note, traditional fishing is portrayed which is an emotional hook that we all relate to. Importantly, this design underscores our vision for a strong sense of community and social cohesion, which is vital to our nation’s future,” he said..

In addition, Dr Forau said the durable and recyclable characteristic of the polymer also fits with the country’s vision for a sustainable and responsible fishing industry.

“The design elements may be small but we hope that each time a person looks at the note he or she is reminded of the contributions of the tuna industry to this nation and the potential that we can get from this industry going forward.”

The industry’s contribution to Solomon Islands Government revenue on average is $260 million, of which 90% comes from fishing licenses.

When revealing the report at the World Tuna Day Celebration 2019 in Honiara, CBSI Statistical Analyst, Mr. Benjamin Kiriau said the report was based on istorical economic data for 2014 to 2018.

“Fish exports contribution to total exports is on average 11%.

“A positive correlation between the tuna and logging has depicted the significant contribution to the country’s total exports and overall economy in terms of foreign receipt earnings.