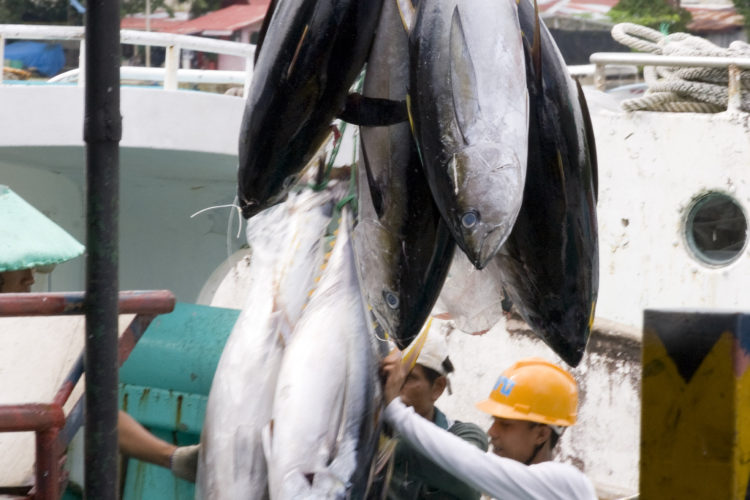 Palau is highlighting the importance of tuna to local food security and to help keep the pressure off its coastal fisheries.

This is to be done by supporting a local pelagic fishery by serving pelagic fish like tuna at all government food service systems and at government and quasi-government events and functions.

In this tiny Pacific nation, where non-communicable diseases are high and gravely impact the health of the people, Remengesau said there is a need to enable the domestic market to increase local access to fish to improve nutrition.

The president said Palau is experiencing high rates of obesity (46.2%), overweight (30.8%), raised total cholesterol (25.8%), diabetes (20.4%), and other non-communicable diseases because of the preference to  consume imported meats and canned foods that are “cheap and nutritionally poor.”

He said tuna will help fill in the gap for a need to go back to traditional foods such as root crops and fish.

Reef fish in Palau is on the brink of being overfished and since studies have shown that tuna and tuna-like pelagic fish species are more resilient to fishing pressure due to their higher productivity and more extensive stocks, his government will set an example by choosing pelagics.

Palau is sustaining key tuna species by closing almost 500,000 square kilometres of its exclusive economic zone (EEZ) to commercial fishing while increasing the amount of tuna allocated to consumption on the island.

Twenty percent of the EEZ is designated as a domestic fishing zone. Remengesau said Palau do not want to be left with tuna of lesser value but consume fish of higher-grade value.

The directive supports the local organisation, Palau Conservation Society’s (PCS) program ‘Choose Pelagics,’ which the president said is “a collaborative and cross-sectoral effort aimed at creating incentives to promote the development of a sustainable domestic pelagic fishery.”

Fabio Siksei, Program Coordinator of the PCS’ conservation and protected areas program said that based on their monitoring, restaurants in Palau mostly serve reef fish

“We try to create a market shift, try to shift that to pelagic,” Siksei said in an interview.

The program along with the Bureau of Marine Resources ongoing nationwide program for anchored fishing aggregating device (FADs) is supporting the artisan fisheries and addressing challenges faced by small scale fishermen.

“Palau continues to work with its local, regional, and international partners to develop alternative pelagic fisheries to support fishing livelihoods and food security through the expansion of a nationwide anchored FADs Network to help improve the feasibility of small-scale pelagic fishing,” Remengesau stated.

Last year, a study conducted by Nippon Foundation-UBC Nereus Program already brought to light the pressure that reefs are already experiencing. The study suggested that Palauans and tourists should eat fewer reef fish and recommended a policy that would  require reductions in fish consumption by both resident Palauans and visitors.

The study suggested that there should be a shift from “seafood consumption to open water fish, such as sustainably-harvested tuna, instead of reef fishes such as grouper, snapper, and parrotfish.”