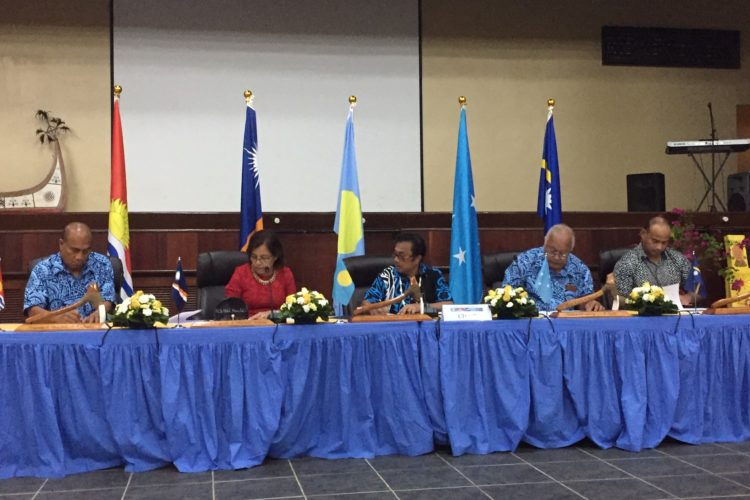 Micronesian nations are uniting to combat illegal, unreported, and unregulated fishing (IUU) by 2023 in the Pacific.

At the 19th Micronesia Presidents’ Summit on 21 February, Palau, Kiribati, the Federated States of Micronesia (FSM) and Nauru signed a communique supporting a IUU Free Pacific by 2023. This challenge was set up by the Republic of the Marshall Islands (RMI).

“The Marshall Islands seeks your endorsement of this vision and goal, to have Micronesian Leaders support an IUU FREE Pacific by 2023 as an outcome of this important meeting.”

In October at the Western and Central Pacific Fisheries Commission’s Technical and Compliance Committee meeting in Majuro, Marshall Islands President Heine called on Pacific nations to agree to get rid of IUU fishing by 2023.

She urged the leaders of the Micronesian countries to make the same commitments to join the fight against IUU.

Palau President Tommy Remengesau Jr. said the Micronesian region might be small but it comprises large ocean states which makes it all the more important to band together to deal with environmental degradation, including illegal fishing.

“My friends, I like to refer to our nations as the Large Ocean States. With this title comes great responsibility. Not only must we exploit our marine resources for the benefit of our people, we must protect them for our children and for the world at large,” Remengesau said when he welcomed the leaders in the February Summit.

“We must, therefore, continue to lead the world in creative responses to the environmental degradation that faces our Pacific Ocean through pollution, climate change, over-fishing, illegal fishing and the like. Together we must move forward with initiatives that prevent IUU fishing, that expand our protected areas and places limitations on pollution at every level.”

The Forum Fisheries Agency, in 2016, estimated fish either harvested or transshipped illegally in the Pacific region to be in the order of $600 million with the actual economic loss to FFA Members being around $150 million annually.

Led by Pacific Islands Forum Fisheries Agency (FFA) members, with the support of members of the Parties to the Nauru Agreement (PNA), the resolution is in line with the goal of FFA members to enhance economic benefits to Small Island Developing States (SIDS) from employment on board fishing vessels licensed to fish in the exclusive economic zones of FFA members.

Heine said the RMI is working closely with the FFA Secretariat in convening an IUU Colloquium in Majuro before the end of the year.

“The target audience will include National Compliance Officers, to our Fishing partners, both flag states and distant water fishing operators,” said Heine.

She added that with development partners, RMI continues to tap into emerging technology to meet the challenges such as the Persons of Interest project to ensure that “we are not so vessel focused in the way we combat IUU fishing; that we are not just collecting information on vessels’ compliance history but more importantly, we’re also collecting information on persons involved in illegal fishing and sharing this information.”