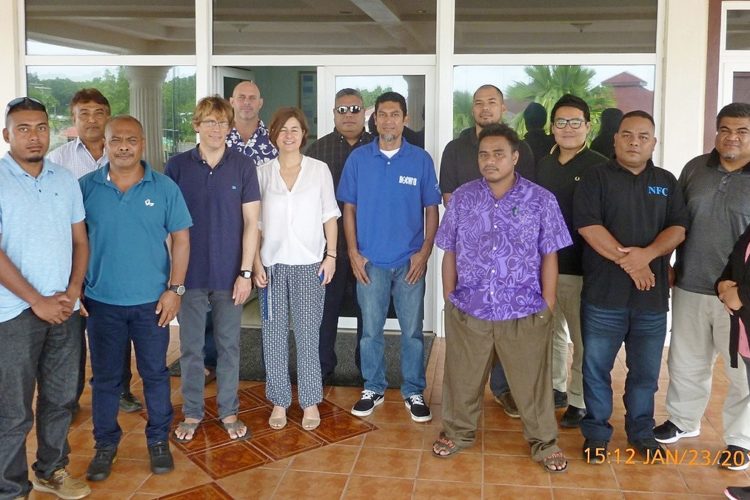 While the FSM has taken the lead in many areas when it comes to simultaneously maximizing revenue, protecting the environment, and ensuring the sustainability of our fish populations — such as the Technology for Tuna Transparency or T-3 Challenge initiated by FSM President Peter M. Christian at the fifth Our Oceans Conference in October 2018 — there’s still much our country can do to improve.

The workshop’s goals included educating the fishing sector on new regulations from the Western & Central Pacific Fisheries Commission on FADs, producing buy-in on how the sector can use biodegradable FADs, and scientific projects in our part of the Pacific.

Citizens unfamiliar with FADs (Micronesians frequently call them “payao”) may appreciate the definition from ISSF: FADs are “man-made floating objects specifically designed to encourage fish aggregation at the device. They can be anchored to the ocean floor or set to drift in the open ocean.”

Aggregation means putting together, so a FAD essentially attracts lots of fish together.

Historically FADs are useful insofar as they can gather lots of fish together in one place, but in recent decades FADs have been made of synthetic materials (like nylon) and they have relatively negative publicity from being associated with problems such as bycatch (i.e. when you’re looking for tuna but you accidentally get sharks and turtles instead), reef damage, and overfishing.

The discussions in the morning focused on the history of FADs and their relationship with countries and fisheries, including in the FSM.

Standout observations included multiple local fisheries advising that approximately 80 percent of their FADs are variously lost, stolen, or drift beyond the legal boundaries of their fishing area —and worldwide approximately 10 percent of all ocean pollution is from lost fishing gear, and 640,000 tons of fishing gear end up in the sea every year (including FADs).

FSM citizens will recall that the aforementioned T-3 Challenge that NORMA and The Nature Conservancy are implementing intends to use electronic monitoring to quash the overfishing problem, and in conjunction with fishing fleets using biodegradable FADs ideally ocean pollution and bycatch issues from entanglement (i.e. when a fish gets stuck in a net) will become less pronounced.

Matthew Chigiyal, assistant director of NORMA, advised that “It’s…in your interest that there is some authority to see what is happening with your FAD…register your FAD per NORMA’s requirement.”

ISSF has been conducting numerous experiments in the past several years in countries such as Ghana (in Western Africa) and the Maldives (an island nation in the Indian Ocean) with biodegradable FADs, and has determined that natural materials like raw twisted cotton perform similarly to contemporary synthetic materials like nylon. (Banana fiber is also potentially useful, though there isn’t presently the industrialization necessary to support its use in large-scale development of FADs).

By the end of the discussions in the afternoon, NORMA, the local fishing companies, and ISSF were discussing what a long-term scientific project in the Western Pacific might look like.

The countries in the Parties to the Nauru Agreement, where more than 90 percent of purse seine fishing occurs, are developing a biodegradable and non-entangling program to reduce the adverse impacts of non-biodegradable materials, as well as the destruction, loss, or abandonment of fishing gear.

The FSM government is dedicated to protecting its ocean resources while simultaneously maximizing their use for the development and well-being of our people. Partnerships between the public sector (i.e. NORMA) and private sector (e.g. CFC, NFC, Diving Seagull) augmented with support from scientific leaders (i.e. ISSF) will help ensure a positive future for both our fish as well as the citizens of the FSM.