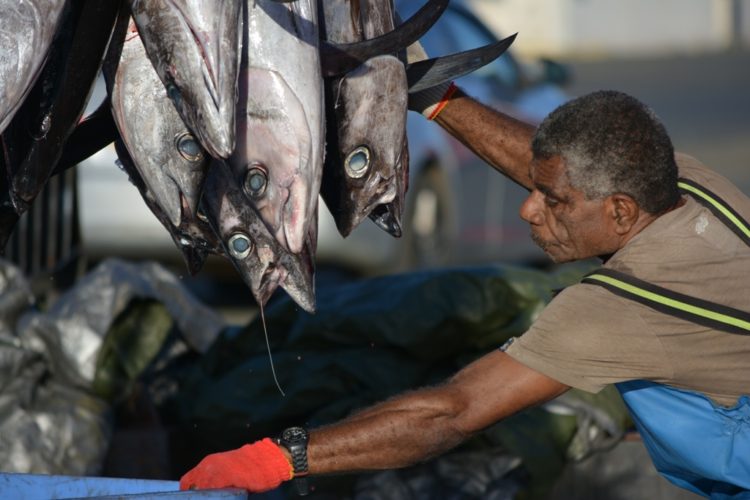 FFA and south Pacific nations are urging that the Tuna Commission agree on a Target Reference Point for the Southern Albacore fishery this week (Photo: FFAMedia2014)

WCPFC15, Honolulu, Hawaii, 12 December 2018— Albacore tuna is a vital resource for many Pacific nations but many domestic longline interests are being scuttled out of business by a growing foreign fleet and the failure of the rule-setting body –the Western and Central Pacific Fisheries Commission (WCPFC) to act.

This week, a few words in a one-year old document will aim to claw back faith and test the credibility of the WCPFC, the world’s most successful tuna fisheries management organisation.

The target reference point (TRP) – a notional ideal stock level – is the essential first step on which all other harvest rules rely.

The promise to set a TRP at WCPFC15 for one of the most negotiated tuna stocks in the Western Central Pacific Ocean, is set to roll out in earnest today, as the clock ticks towards the final plenary on Friday evening.

To ensure the momentum from last year’s meeting in Manila wouldn’t be lost, the WCPFC14 setup a working group with New Zealand at the helm to steer interested countries towards effective engagement on that agenda item.

Outgoing Chair of the WCPFC Rhea Moss-Christian is keen to ensure the promise of Manila is met, but her challenge is to extract consensus from a diverse group of nations with widely differing interests – a group that includes powerful distant water fishing nations as well as coastal states.

The determination and commitment of Forum Fisheries Committee members around the table, including Ministers from Samoa, Tonga, and Niue, was clear in their opening round of country statements.

Samoa’s Minister for Fisheries Afioga Lopao’o Natanielu Mua reiterated a call he made 12 months before in Manila, to the same stakeholders.

“It’s the target species for our domestic Longline fishery, that has been one of the main foreign revenue earners for our economy as well as supporting food security and livelihoods for our people,” the Minister said. He also made pointed mention of  “the uneven playing field due to the subsidy support received by some fleets and therefore [the need for] an appropriate management strategy …to ensure that domestic, unsubsidised fleets remain economically viable.”

Alongside Mua are other high-level Pacific leaders in the countries most affected by the current approaches which are threatening incomes, food sources, and the long-term future of domestic longline fleets.  The voices from Pacific nations most connected to Albacore are pitching the message at every opportunity that the Target Reference Point for South Pacific Albacore is a major part of the reasons bringing them to the Tuna Commission meeting.

Niue’s Fisheries Minister Dalton Tagalagi echoed the sentiments of his neighbourhood—South Pacific Albacore needs that target reference point to get moving on its harvest strategy.

He reminded the plenary of the shared responsibility from members to ensure fisheries are managed sustainably.

“We believe that we can all share and successfully manage this vital fishery if we honestly negotiate in good faith and transparently” he said.

Acknowledging the ongoing talks since 2015 to get traction on a strengthened conservation and management measure for South Pacific albacore, Tonga’s Minister for Fisheries Semisi Fakahau told the Commission that Tonga is committed to working with all members and fishing partners to support adoption of the target reference point for South Pacific Albacore.

“In order to maintain the long-term sustainability and economic viability of the tuna fisheries in the WCPO, and to secure livelihoods for local fishermen, it is important that stronger and more effective fisheries management arrangements for migratory tuna stocks and other species are agreed at this meeting.”

Kiribati Fisheries Minister Tetabo Nakara hinted that the conversations towards locking down the reference point won’t be easy.  He noted during his country statement that: “there are agenda items that may polarise our collective approach, and when those agenda items are considered I would mutually call on us all to put aside our differences and to humbly approach those issues as one group in one voice with one amicable solution agreeable to us all.”

Presenting the position of the 17-member FFA bloc to the commission, FFC Chair Tepaeru Herrmann of the Cook Islands opened with the reminder that the Target Reference Point talks holds no surprises; it’s the fourth year in a row the FFA have proposed this move.

When it comes to the time needed to reach a meaningful number, the devil will be working through the detail. The WCPFC Secretariat and SPC’s Oceanic Fisheries Program have provided an Information paper on trends in the Southern Albacore Fishery, revealing a 2017 peak in annual catch estimates for albacore in the south Pacific (south of the equator) of 92,989 metric tonnes, 98% of that by long liners and the remainder by trolling. With both fishing gears, the 2017 catch is upon the previous year – 29% higher for long liners, and 12% higher for trollers.

By comparison, the 2017 total albacore catch in the South Pacific was 72,272 mt and the longline catch within the southern part of the Western and Central Pacific Commission area — excluding archipelago waters — 69,688 mt, one of the highest in the last 10 years. High seas longline catch estimates represent 51% of the total and have ranged from 27-51% of the total over the last 10 years. By flag (or attributed nationality based on charter agreements), China and Chinese Taipei had the highest catch estimates of South Pacific albacore in 2017 (29,125 mt and 12,086 mt respectively), and together represent 59% of the total catch. 70% of their catch was taken on the high seas.

Science updates on effort warn there is ‘considerable uncertainty in 2017 effort estimates, mostly due to gaps in information and data.’ The number of deployed hooks in 2017 within the commission area south of 10 degrees south was 30% higher than in 2016, and 13% lower than the high seen in 2012. The estimated longline effort in this region was estimated at 277 million hooks in 2017.

Representatives of the Pacific tuna industry are pushing hard for action on albacore at this year’s WCPFC15 in the margins of the meeting and from the floor.

“Nobody can deny the perilous state of this fishery,”John Maefiti, Executive Officer of the Pacific Islands Tuna Industry Association said in an intervention in the WCPFC plenary yesterday.

“We are fortunate that the Southern Pacific Albacore is biologically healthy, but the key to economic viability of a fishery is the catch per unit effort, or CPUE.  We have observed a continually declining CPUE over several years, diminishing what was once a robust and attractive fishery to a shadow of itself. The inability of the WCPFC to control a massive increase in High Seas fishing effort is a sad indictment about this commission’s ability to manage the fisheries under its charge,” Maefiti said.

The Pacific fishing industry has joined the Forum Fisheries Agency and its member governments in calling on WCPFC to take heed of advice from its Science Committee and to ensure the long-term commercial viability and sustainability of the Pacific’s southern longline fishery.

Given the scale of detail and information on the Target Reference Point for South Pacific Albacore and other inter-related issues such as the domination of the southern albacore fishery by China and Taiwan, there are real concerns that discussions will get bogged down once again. This would mean seeing the time window for a decision close for another year.

FFA’s new Director General and her team will be as keen as the high-level heads of Pacific delegations and the outgoing WCPFC Chair to ensure that doesn’t happen and South Pacific Albacore gets the Target Reference Point the commission has promised. But with only a few days to go and other high priority issues including the Tropical Tuna Measure for Skipjack, Yellowfin and Bigeye; Compliance Surveillance, and Monitoring; and Transhipment, another late night/early morning finish may well be on the cards for WCPFC15.    —Lisa W-Lahari / TUNApacific