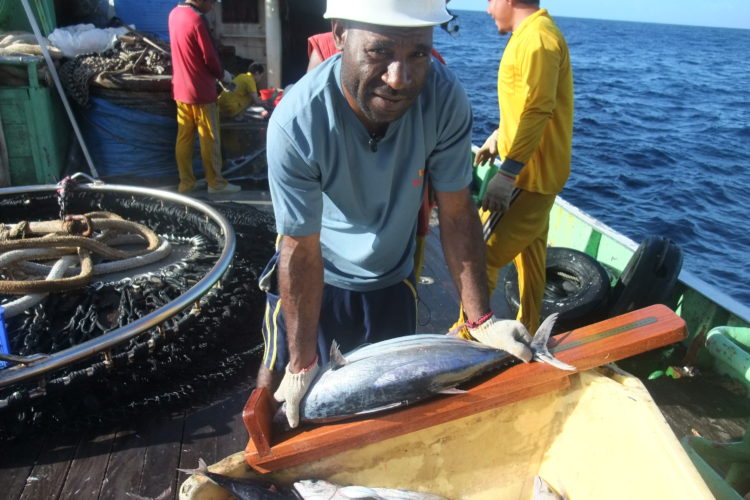 Observer coverage and electronic monitoring are two ways to create transparency and combat IUU fishing, according to calls from Pacific leaders

Two tiny Pacific nations have laid down the gauntlet to fishing nations and regional fisheries owners and now lead the way to ensuring long-term sustainability of tuna stocks in the Western and Central Pacific ocean with the issuance of bold challenges.

And, Hilda Heine, President of the Republic of the Marshall Islands, called on Pacific nations to commit to a 2023 target for the abolition of illegal, unreported and unregulated (IUU) fishing.

Opening the 15thWestern and Central Pacific Fisheries Commission here today, chair Rhea Moss-Christian praised the efforts of what she described as two of the smallest countries in issuing fisheries challenges that other nations should follow.

“It is no coincidence that two of the boldest challenges for our region’s fisheries come from two of the most vulnerable island nations whose economies and futures are acutely tied to the health of these resources,” Moss-Christian said at the opening of the five-day negotiation to determine the fate of critical tuna species – bigeye, yellowfin, and skipjack.

Fisheries are the key economic driver for RMI and FSM but climate change and over fishing can impact the well-being of the coastal communities who depend on fish for their way of life.

Moss-Christian said WCPFC has “the lead responsibility in meeting these challenges issued by two of its members at the highest level and I believe that we are already on this path.”

The Marshall Islands has been quick to support measures to end IUU fishing because of the impact of this activity on tuna stocks.

“IUU has devastating consequences. It is organised crime that affects socio-economic growth and future generations, and the Pacific has shown itself to be vulnerable,” President Heine said at the October Technical and Compliance Committee (TCC) of WCPFC.

Christian made his country’s position clear at the Our Ocean Conference in Bali, Indonesia, when he announced a commitment to enforce 100 per cent at-sea monitoring coverage of all industrial fishing in their waters by 2023.

According to Eugene Pangelinan, Executive Director of the FSM National Oceanic Resource Management Authority (NORMA) the challenge would  be achieved through a combination of observer coverage and electronic monitoring.

“The FSM will use this invaluable tool so our fisheries managers and fishing industry partners can obtain much-needed, detailed data on fishing effort, target catch composition, and by-catch of non-target species that come in on these vessels,” Pangelinan said in a statement today.

The WCPFC is the central decision making body for management of tuna fishing in the Western and Central Pacific Ocean.