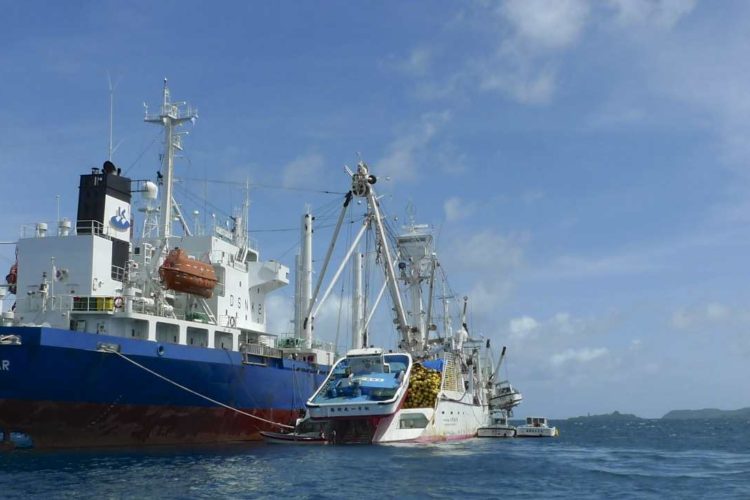 The transfer of tuna between ships on the high seas can be a cover for illegal human and drug trafficking (photo: Francisco Blaha; Note: none of the boats in the image are involved in illegal activities)

Honolulu, Hawaii… With the consumer market increasingly demanding to know their food is sourced ethically and sustainably the eight tuna-producing nations that are Parties to the Nauru Agreement (PNA) have decided to address human and drug trafficking as part of their fisheries surveillance efforts.

Kumoru says it is important to implement policies, which monitor distant water fishing nations in the high seas, beyond the PNA countries’ national jurisdiction and establish greater transparency.

In September at the Pacific Islands Forum leaders signed a security agreement that tackled climate change and crimes such as drug trafficking, human trafficking and illegal fishing.

“It important that we contribute to a bigger picture of what our leaders want,” Kumoru said.

Part of the role of protecting the region’s ocean from illegal activities is addressing the issue of trans-shipment from one boat to another.

On the high seas, there is a lack of regulation and control measures to verify fish trans-shipment.This allows the possibility for fishing vessels to undertake a multitude of illegal activities such as drug transportation, human trafficking and illegal,unreported and unregulated (IUU) fishing.

Palau Minister of Natural Resources, Environment and Tourism (MNRET) Ummich Sengebau said in a conference in Copenhagen in October that criminal networks had caused disastrous impacts to the Pacific fishing industry.

In 2015, Palau declared war against drugs, forcing traffickers to find innovative ways to smuggle the illegal substance to the island nation. Drugs have been moved to Palau by plane, ship, fishing boats and through the postal system.

Currently there is a ban on tuna trans-shipment on the high seas, but loopholes allow the practice to continue. The Western and Central Pacific Fisheries Commission (WCPFC) and the PNA have also endorsed a ban on high seas refueling effective 2020.

The ban will require fishing vessels to refuel in ports or in designated zones, as part of the efforts to eliminate IUU.

According to a report on the impact of IUU fishing prepared for the FFA in 2016 the estimated the value of catch associated with illegal fishing is at over US$600 million.

The PNA and FFA have called for the support of distant water fishing nations, who are also members of the WCPFC, to eliminate IUU fishing.

“The value of the Pacific fishery to individual Pacific Islanders and the economies of our 17island members is enormous,” said Dr Manu Tupou-Roosen, Director General of FFA in a statement.

“This is motivating new initiatives in support of existing monitoring, control and surveillance programs to eliminate IUU fishing,” Tupou-Roosen said.

WCPFC manages the world’s largest tuna fishery and next week’s meeting is to discuss measures that will sustainably manage commercially valuable tropical tunas. The meeting in Honolulu is scheduled from December 10- 14.