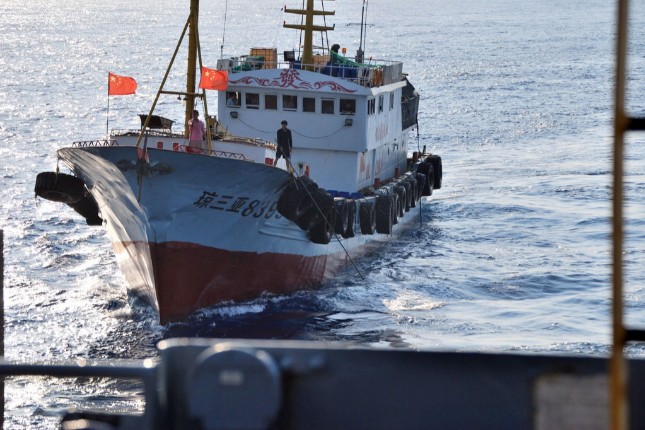 Access to and competition over natural resources has been one of the most common triggers for conflict. Throughout the centuries, countries and communities have fought over productive agricultural land, trade routes, spices, textiles, opium, and oil, to name just a few. But the battle over one natural resource—fish—has long been overlooked. As trends in the global fish industry increasingly mirror the conflict-ridden oil sector, fish may become the newest addition to the list of resources driving geopolitical competition. There are five parallels between oil and fish that call for increasing the sustainability of the fishing industry, or we might find ourselves facing what U.S. Coast Guard Captain Jay Caputo has called “a global fish war.”

Nearly half of the world’s total oil production in 2017 came from just five countries, and nearly half of the world’s proven recoverable crude is in the Middle East. As populations grow and economies develop, the Organization of Petroleum Exporting Countries (OPEC) projects global demand for crude oil will increase by 15 percent by 2040. Global dependence and the need to secure supplies have driven countries to war; since 1973, oil is linked to between 25 and 50 percent of all interstate conflicts worldwide.

Similarly, roughly 60 percent of the world’s tuna is caught in one geographic region, the Western and Central Pacific Ocean. As such, the Pacific could be the Middle East of tuna, where hungry nations compete for the valuable resource. Conflict over fish can already be found in South and Northeast Asia, Central and South America, as well as in African waters.

A Tool for Political Power

From the Arab oil embargoes in the 1970s, to Russia shutting off gas supplies to its enemies in the 2010s, energy is increasing wielded as a geopolitical weapon. For example, Moscow used its “petro-power” to provide heavily subsidized energy to Ukraine when it was led by Russia-leaning President Kuchma. Under Western-friendly President Yushchenko, Russia disrupted supplies and imposed punitive price increases.

Decades of politics and posturing in the Arabian Gulf continue to focus on oil. Following the resurgence of disagreements between the United States and Iran over the latter’s nuclear program, the Trump Administration re-imposed sanctions and moved to end oil shipments from Iran. Last weekend, Iran conducted military exercises in the Strait of Hormuz, which carries an estimated 20 percent of the oil traded worldwide, to demonstrate its ability to block the critical waterway.

Similarly, as one of the world’s most valuable fish species, tuna’s concentration in the Pacific has made sovereignty of those waters, and access to those fish, extremely valuable. With 22 small island states and territories within the Western and Central Pacific region alone, overfishing and squabbling over access and fishing rights is common. Political control of the Western and Central Pacific Fisheries Commission (WCPFC), which was created via an international agreement to manage the region’s fisheries, is highly sought after, and equity among members is a constant concern.

China, a member of the WCPFC and the most fish-dependent country in the world, uses its fishing fleet, according to the Department of Defense, as a third arm of its navy. In its 2017 annual report to Congress on military developments in China, the Pentagon stated that “China is building a state-owned fishing fleet for its maritime militia force in the South China Sea.” By sending its fishing fleet into disputed waters, China can use those vessels as an excuse to deploy its Coast Guard cutters to defend the “helpless” fishing vessels. China has threatened war if any other nation, including the United States, attempts to bar them from the surrounding waters. It is not a stretch to think that the Chinese strategy of leading with its fishing fleet will be implemented in other rich fishing regions, like the Pacific.

While the global supply of proved oil reserves is projected to meet global demand through the middle of this century, oil is a finite fossil resource that cannot be replenished, which makes it unlikely that our dependence on oil can be sustained over the long term.  Similarly, while fish are technically a renewable resource, their future is precarious. Nearly 90 percent of the world’s fish stocks are fully exploited or overexploited, and some scientists estimate that in 30 years there may be little or no seafood available.

While fish production, largely driven by aquaculture, is expected to increase 17 percentby 2025, it won’t keep up with demand, which is projected to increase by 21 percent. At the same time, external forces like climate change are pressuring global fisheries. And while ramping up aquaculture could help address the global fish shortage, it is not necessarily sustainable and faces some serious challenges. While it is unlikely that we are down to the last fish, within a foreseeable future, wild-caught fish could become a thing of the past.

Oil is the world’s most traded commodity and its primary fuel, supplying 33 percent of all of our energy. Furthermore, the strong global economy and growing world population are expected to increase the demand for oil in the coming years. Petrochemicals are integralin everything from lipstick to electronics to aspirin; oil byproducts are used in the production of plastics, lubricants, waxes, pesticides, and fertilizers. In 2015, the oil and gas industry supported 10.3 million jobs and contributed more than $1.3 trillion to the U.S. economy alone.

Similarly, one billion people currently depend on fish to meet their nutritional needs—and this number will grow as the population does, especially in developing parts of the world. Fish is the world’s most highly traded food commodity. In addition to the roughly 100 million tonnes that are consumed for food each year, fish also provide fish oil, glue, animal feed, and fertilizer, and play a growing role in biomedical research. Even without counting aquaculture, marine fisheries provide approximately 260 million jobs worldwide. If the sector collapses due to unsustainable and illegal fishing practices, it will have calamitous consequences for societies around the world.

While the value of crude oil production alone is a staggering $1.7 trillion, nearly $133 billion (or about 8 percent) ends up in the black market every year. The illegal petroleum trade undercuts business, undermines governments, and damages the environment. The perpetrators are increasingly connected to transnational organized-crime syndicates and terrorist organizations. For example, ISIS made as much as $3 million a day after it took control of oil production capacity in Syria and Iraq.

The seafood industry is significantly smaller, with nearly $150 billion in sales each year. But illegal, unreported, and unregulated (IUU) fishing is valued at up to $36 billion a year—or about 25 percent of the legal market. Like oil, transnational criminal organizations exploit fish to fund their other activities: Mexican drug cartels, for example, diversify their income by trafficking in the totoaba fish, whose swim bladders sell for $20,000 per kilogram.

In the highly elastic illicit market, fishing vessels are used to traffic illegal drugs, arms, and even humans. Criminals can leverage their existing assets, especially boats, to move goods illegally through well-established global supply chains. In 2016, the U.S. Navy confiscated 1,500 Kalashnikov rifles, 200 rocket-propelled grenade launchers, and 21 machine guns from a small fishing craft in the Arabian Sea smuggling arms from Iran to Yemen. The former U.S. commander of the Fifth Fleet, Vice Adm. Kevin M. Donegan, said “out-of-work fishermen”  were moving all sorts of illegal goods throughout the region. And the U.S. Coast Guard recently seized more than 17,000 pounds of cocaine, worth nearly $260 million, from four fishing boats off the coasts of Central and South America. As fish stocks continue to decline, fishermen will find it increasingly attractive to use their vessels to smuggle illegal goods.

Clearly, there are significant differences between oil and fish, and how nations and non-state actors leverage them as tools of economics and power. However, the gap is not as wide as policymakers and the public may think. Today, the United States spends very little—about $800-900 million depending how you count—on fisheries management and law enforcement. The U.S. military spends upwards of $60 billion per year to maintain a military presence in the Persian Gulf alone, in part to protect access to its oil resources. As the strategic value of fish continues to rise, the management and security of the fishing industry deserves more political attention and smarter policies to ensure a more sustainable and secure future.