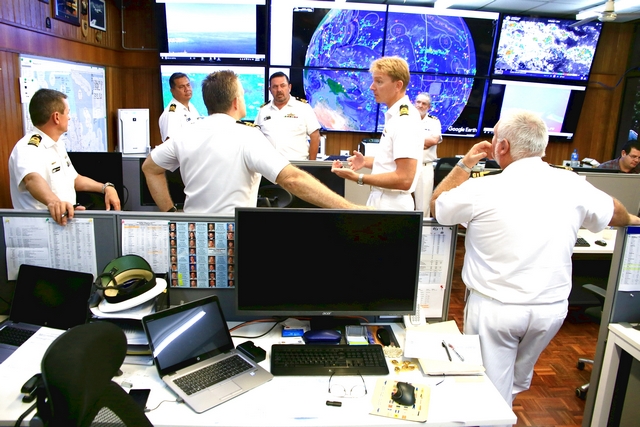 WHEN the Pacific met its international partners at the 12th Western and Central Pacific Fisheries Commission in Bali, Indonesia in 2015 it was grappling with illegal operations at sea.

Figures at the time claimed that Illegal, Unregulated and Unreported fisheries activities cost around $USD600million annually in the Pacific.

And 95 per cent of that activity – according to the international environment advocate, Greenpeace – is conducted by licensed vessels.

Robust guidelines put in place by the Forum Fisheries Agency have attempted to increase monitoring and surveillance of the purse seine fleet which operates in the region.

With around 90 per cent of the fleet monitored by on-board observers, the purse seiners are estimated to account for 70 per cent of illegal activities.

That’s according to figures released by the Pew Charitable Trust.

A Pew study reports harvested or trans-shipped tuna in the region at about $UDS616.11 million a year – 12 per cent of the $UDS5 billion paid to fishermen for their tuna catches in the region in 2014.

Despite recent efforts and observer coverage, the estimated volume of IUU product was found to be highest in the purse seine fishery, which accounted for 70 per cent of the illegal catch.

Much of that activity was driven by the use of illegal fish aggregating devices.

In the longline fleet transhipment of fish at sea, out of sight of authorities, was the weak point.

The Pew Charitable Trust’s Amanda Nickson said it was clear from the figures that transhipment at sea is unacceptable.

“Our position remains very clearly that transshipment at sea should be banned until there are sufficient controls in place to ensure that we don’t have it operating as a loophole for IUU activities,” Nickson said at the 14th WCPFC Meeting in the Philippines.

“At this point I don’t see that we’re seeing a great deal of political will to address the issue as we would like but we certainly hope to see improved discussion.”

“Unfortunately because WCPFC has not formalized the guidelines like they were supposed to, they basically rubber stamped any request for long liners to trans-ship,” Gibbon said.

“So at this point, 52 per cent of long liners operating in the WCPFC have the authorization to trans-ship. And that is not what the WCPFC envisioned when they put these regulations in place.”

One of the other issues is confronting the industry is that independent observer reports are often not submitted to the WCPF Secretariat.

In 2016 there were approximately 900 at sea trans-shipments but only one observer report made it to the secretariat.

“So there is very little monitoring of what is going on,” Gibbon said

“There’s a lot of transshipment that initially was thought was not going to occur but as a result of commission inaction has actually allowed this to occur.”

Gibbon believes cooperation from all the relevant authorities is key to the success of any monitoring programme.

“The observer programmes (must make) sure that their reports are submitted both to the national, sub-regional and secretariat,” he said.

“And it’s going to take those authorities working together to cross check between the catch reports of the fishing vessels, the transshipment reports of what actually is transferred and then also the landing reports and making sure that all that information make sense.”

That speaks to a broader ongoing issue of needing a strong compliance regime within the commission.

Amanda Nickson: “We’ve see these trial compliance regimes roll through but we believe they could be more transparent and we believe there needs to be a more formalized and permanent compliance monitoring system in place. “

So, for how long will those discussions continue without concrete measures being put in place to end the illegal activities?

Forum Fisheries Agencies Director-General, James Movick, raised the issue of the need for more observers with the relevant equipment to report illegal activities in real time.

He was asked whether two years after talks in Indonesia the discussion on observers was merely talk without action and completely unachievable.

“No, I think we can achieve it. We’re experimenting,” Movick said.

“We have trials underway and the commission itself is seeking to develop standards for e-monitoring and e-reporting and work quite well in other fisheries around the world.”

Movick said current work concentrated on how to adapt e-reporting standards for operating conditions in the Pacific.

“We should see a higher degree of monitoring capability for these boats,” Movick said.

“I don’t think it’s an impossible task but as the scientist do, there will be margins of errors built into the scientific analyses. By and large we will have sufficient, verifiable data the scientists will be happy that they’ve got something statistically sound.”

Movick and Ludwig Kumoru – CEO of the Parties to the Nauru Agreement – believe the e-monitoring option is possible in five years.

“With the way PNA is implementing the Vessel Day Scheme for the longline – within five -years is achievable,” Kumoru said.

“But first of all we need to get it done within our zones, then and only then can we look to extend it to the high seas.

The Parties to the Nauru Agreement are the Federated States of Micronesia, Kiribati, the Marshall Islands, Nauru, Palau, Papua New Guinea, the Solomon Islands and Tuvalu.

This scheme places a limit on the number of vessels operating in the waters of the PNA in an attempt to ensure resource sustainability.

Monitoring at sea, however, is only one part of the equation.

Two years after Bali the gaps in the system remain

“We don’t yet have comprehensive port-state controls, we don’t yet have significant enough level of observer coverage on long liners and we don’t have a sufficient system in place to ensure the safety of those that were asking to help us ensure the system is legal and verifiable,” Nickson said.

“So there are a lot of gaps yet to plug.”