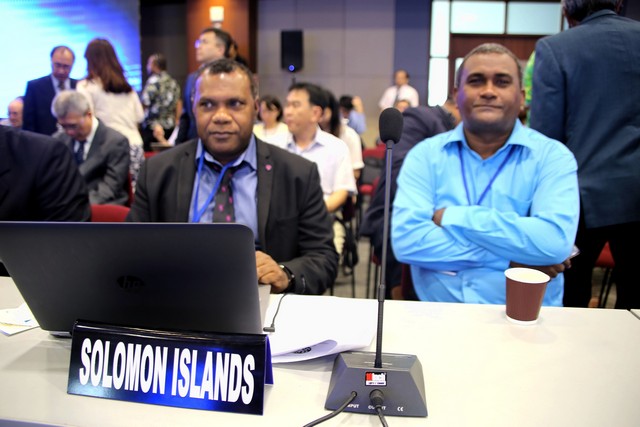 Dec 4, WCPFC14, Manila— SOLOMON Islands has pulled out from a key tuna deal called the Tokelau Arrangement, citing it as a danger for the country and its catch allocation in the future.

The Tokelau Arrangement is an agreement amongst Pacific Islands Forum Fisheries Agency (FFA) member countries, to limit the catch of southern albacore tuna in their EEZ waters.

The aim is to restore profitability and sustainability to the fishery but the arrangement will only work if all countries in the albacore fishery take part.

Solomon Islands is part of the arrangement, which was signed during the 11th annual session of the Western Central Pacific Commission (WCPFC) held in Samoa, in 2014.

The Under-Secretary for the Ministry of Fisheries and Marine Resources Ferral Lasi has confirmed the country’s withdrawal from the agreement.

“Yes, we have pulled out because it has the potential to sharply constrain our catch allocation in the future.

“We have our policy to develop our own long-line fishery in the future and this agreement could stand in the way, constraining our catch limit,” Mr Lasi, who is also the Head of Delegation (HOD) for the Solomon Islands, in the 14th Tuna Commission meeting said.

Speaking to Regional Journalists in a press conference over the weekend, WWF’s Bubba Cook said the withdrawal of Solomon Islands from the agreement is a bit unfortunate, when relating it to Pacific solidarity.

“The greatest strength of the Islands is their solidarity. When the Islands come together and want something done as we saw last year at the Commission meeting with respect to the observer safety issue, they can get things done.

“And with respect to the Tokelau Arrangement, we have been calling for improvements in the Southern Long-line fishery now probably for a decade and things continually get worse.

“The fleets operating in the Pacific are continuing to see their catch rates fall, they are struggling to make their businesses viable and of course that is driving them to set more and more hooks to catch fewer fish which those hooks which aren’t catching albacore are catching things like turtles and sharks so it is having a multitude of effects beyond just the direct targeted fishery itself.

“So the Tokelau arrangement brought those countries together to collectively try and address at a Pacific Islands level, management of the Southern Long-line fishery, in a way that would provide reasonable allocations to all of the countries that are involved,” he said.

“With Solomon Islands opting out, I think that diminishes the power and influence of the Tokelau Arrangement. Although I have been told that the Tokelau Arrangement is ‘not dead’, it will continue, it is just not going to have the same strength it would if everyone was inside the tent pushing for the same goals,” Mr Cook added.

When asked the Under-Secretary about the view of WWF in terms of the Tokelau Agreement, and the Pacific Solidarity he said, “In terms of regional solidarity, we are not going to forego our development potential when it weighs heavily against us.”

It was understood that the Pacific solidarity issue will be one of the huge question asked, when the meeting continues this week.–ENDs