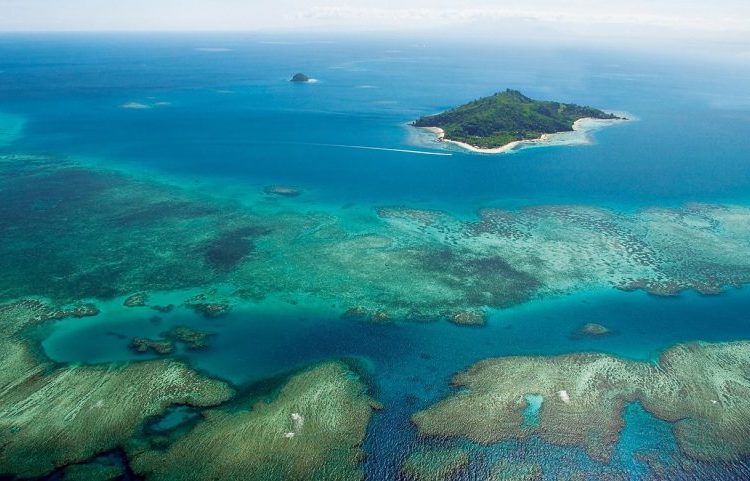 People often think of Pacific Island Countries and Territories as a tropical paradise teeming with coral reefs and abundant and diverse fishes, but changing conditions may place this region and its marine ecosystems under increasing stress.  A new publication in the Journal of Marine Policy explores how different climate change scenarios will affect marine biodiversity and fisheries in this region throughout the 21st century, presenting information on over 1,000 species of marine fishes and invertebrates.

Under a high emissions climate change scenario, the Pacific Islands region is projected to become warmer and oxygen dissolved in the ocean is projected to decrease, with these waters also becoming increasingly acidic.  Together these conditions will cause declines in the productivity of plankton at the base of the oceanic food web.

While similar changes are expected to occur in many regions throughout the globe and may even occur more quickly in other areas, the Pacific Islands are particularly vulnerable to these climate change impacts.  This region contains the western warm pool, which has historically been the warmest oceanic region on the planet. As a result, increased warming and changes in other physical and biogeochemical conditions will push this area into new territory where “novel” habitats will be created unlike any other ecosystems seen on Earth since geological times. The creation of these novel habitats will have substantial impacts on marine biodiversity and fisheries.

The study published in Marine Policy projects that these changes could result in local extinctions of marine species that exceed 50% of current-day biodiversity levels, with some regions experiencing local extinctions in excess of 80% of species. These extinctions will result from organisms migrating out of regions where oceanic climate has changed and seeking out new habitats more conducive to their survival. For organisms where migration is not an option, their abundance is likely to decline in the western tropical Pacific.  These localized extinctions will impact commercially important fishes resulting in equally steep declines in the maximum levels of catch that fisheries can take in this region.

Loss of fisheries and marine biodiversity could be a particularly strong blow to Pacific Island Countries and Territories.  Many Pacific Islanders are highly dependent on marine organisms for food, provision of economic opportunities, and cultural heritage.  Also, Pacific Islands are often developing countries with fewer resources available for societal adaptation to climate change.  Due to the large potential changes in fisheries and marine biodiversity, the high dependence of the region on marine resources, and a low capacity for adaption, these factors combine such that climate change may have a particularly large impact on this region.

However, there is a silver lining in that the ecosystems of these islands fared much better under a climate change scenario where greenhouse gas emissions were curbed close to the level that would be needed for achieving the Paris Climate Agreement.  As a result, these changes in oceanic conditions are not inevitable but instead depend on the immediate actions of countries to maintain their commitment to limit greenhouse gas emissions as is being discussed this week in Bonn, Germany during the 23rd Conference of the Parties to the United Nations Framework Convention on Climate Change.

The report in Marine Policy was produced by the Nippon Foundation-Nereus Program, an interdisciplinary research program encompassing 17 universities focused on advancing our understanding of climate change impacts on global ocean ecosystems, fisheries, and coastal communities.  The authors of this report include Drs. Rebecca Asch from East Carolina University and William Cheung and Gabriel Reygondeau from the University of British Columbia.