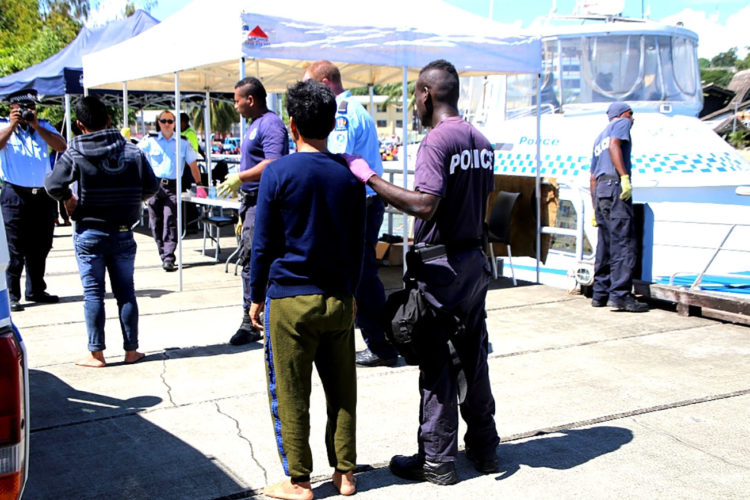 The threat to Pacific island countries posed by illegal Vietnamese Blue Boats is significantly more complex than first thought and would need a “collective action” to stamp it out.

That was the “clear agreement” reached at a special ‘blue boats’ meeting held in Brisbane last week between Pacific countries. Many of the countries, including Australia, have already suffered environmental and financial losses from the expanding illegal activities by Vietnamese boats and citizens.

According to the Brisbane meeting organiser, the Forum Fisheries Agency (FFA), Pacific nations have shared what they know, but also realised there’s still a lot more they need to find out.

“We have to work through those questions before a more comprehensive solution is found,” FFA Director General, Mr James Movick said in a statement.

The complexity of the threat means it will require more than a simple add-on to the current monitoring, control and surveillance (MCS) system employed by the region to fight Illegal, Unreported and Unregulated (IUU) fishers operating in its oceanic fisheries.

The MCS system which is coordinated and managed principally through the FFA and its regional sibling the Pacific Community (SPC) is making inroads into the US$152.67million that Pacific islands countries lose annually to IUU activities.

However, Mr Movick pointed out that in the case of the ‘blue boats’ threat, the FFA is only one part of a regional response.

The implications of this ‘blue boats’ threat are much broader. On top of the obvious risks to conservation and biosecurity are the serious costs to national development and security.

“Ultimately, the enforcement and prosecution authority lies at the national level; as well as dealing with Vietnam at the diplomatic level which opens up questions of just how seriously that nation takes its engagement with this part of the world.”

However, it is totally a different kettle of fish when small Pacific island countries come calling. “The Vietnamese government have virtually told them to get lost and told them to prove that they are Vietnamese boats,” one official at the Brisbane meeting told Radio Australia.

The Federated States of Micronesia (FSM) has been one of the most vocal against the ‘Blue Boats’ and their plight is a graphic example of the threat to Pacific countries.

A summary of their ‘blue boats’ experience starting from December 2014 was handed out during the Pacific Leaders Forum held in September 2016 in FSM. It details the early costs of the blue boats and the total lack of acknowledgement by the Vietnam Government.

Since December 2014, the FSM has arrested over 9 Vietnamese fishing vessels and approximately 169 Vietnamese.

To date, the Vietnam Government has never assisted the FSM Government financially in repatriating its citizens back to Vietnam or assisting financially to provide for the basic needs of the Vietnamese, while they are detained in the FSM.

It costs the FSM approximately $40,000 for a patrol boat to travel to Yap State and back to Pohnpei. This figure includes food and fuel costs.

It cost the FSM approximately $16,000 for a patrol boat to travel to Chuuk and back to Pohnpei. This figure includes food and fuel cost.

The exact costs to feed, provide basic needs and provide necessary security are unknown at this time, but are substantial relative to FSM’s budget.

The FSM has charged the aforementioned illegal fisherman with various violations of FSM law: illegal entry into the country, human smuggling, illegal fishing. At the time of some of the aforementioned arrests, the Vietnamese boats have attempted to escape. In situations like these, the Department of Justice will charge them with resisting arrest or obstruction.

It’s this broader context and lack of response from the Vietnam government that make the ‘what’ and ‘how’ of delivering the “collective action” that Pacific countries are calling for requiring more thought and discussions.

There is a need for smarter sharing of experiences and information across all the judicial, diplomatic and other areas of engagement on this threat.

For a strategic region-wide response to be effective, it needs to address the broader consequences of violating national borders and resources.

This is on top of collective diplomatic action toward getting the Vietnam government to take-up responsibility for dealing with the illegal activities perpetrated by its citizens. This should include covering the costs of detaining the boats and crew and reparation back to Vietnam.

Representatives attended the Brisbane meeting on 1&2 May from Micronesia, Marshall Islands, Nauru, New Caledonia, Palau, Papua New Guinea, Solomon Islands, Tokelau and Vanuatu. They were in Brisbane to develop a collective response, along with officials from Australia, New Zealand, France, the United States and the Forum Fisheries Agency.