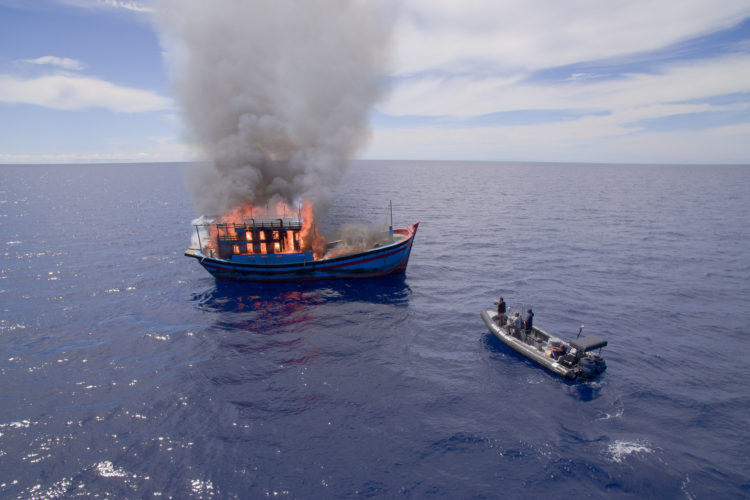 Koror, Palau — ‘Blue Boats’ a phantom fleet of marginally registered fishing vessels, set sail from small villages in Vietnam to venture out and spread throughout the Pacific. Made of wood and painted in a hue that blends invisibly with the ocean, these boats are virtually undetectable to 21st-century marine radar.

Bypassing tuna, these poachers target coastal fish stocks and other marine resources that are easier to harvest. Although they do not come for the prized tuna catch, their unwelcome entry in the Pacific waters now poses a big problem to many small island nations in the region. These boats have been spotted in Palau, Federated States of Micronesia, Papua New Guinea, Australia, and New Caledonia. There is also a strong possibility that they are in the Solomon Islands and Vanuatu.

The growing threat of these ocean pillagers in the Pacific is a serious concern raised during the annual Western and Central Pacific Fisheries Commission (WCPFC) meeting held in Nadi, Fiji from Dec. 5 to 9.

James Movick, director general of Forum Fisheries Agencies, said these poachers are not after the highly-migratory species but are stealing coastal reef resources such as sea cucumbers, clams and other sea creatures that local fishermen are not even allowed to take.

Vu Duyen Hai, head of the Vietnamese delegation to the WCPFC meeting, said Vietnam has approximately 105,000 blue boats. While aware of their intrusion, Vu could not say how many of them have illegally entered the regional waters.

Because the blue boats are not equipped with GPS, Hai said they follow the fish and unintentionally enter the EEZ of other nations.

While it may not be clear from which villages the blue boats are coming, these fishing vessels bear the tradition of Nha Trang, the first big boat-building city surrounded by several harbors at the northern end of the South Coast and its river mouth holds hundreds of boats. These motorized fishing boats are painted, with bright red and white trim around the windows and panels in the cabin top. Their bows are tall.

Some nations take a hard-line in dealing with these blue boats, which have been compared to a “thief in the night,” who enters the home and steals the most precious resources. In Palau, Vietnam’s unwanted poaching has been put on notice with at least five boats having been burned since 2015. The vessels that had been burnt were caught fishing illegally off of Kayangel Island, with over 8 metric tons of sea cucumbers and reef fish on board. “We will not tolerate any more unsustainable acts. Palau guarantees, you will return with nothing,” Palau President Tommy Remengesau Jr. said.

“I think they are doing very big damage. I mean we have found them in Australia, in Papua New Guinea, in Palau, and Federated States of Micronesia. So if they have found them there, then they must be everywhere,” Ludwig Kumoru, CEO of Parties to the Nauru Agreement (PNA), told Pacific reporters at the WCPFC meeting.

Vietnam, a cooperating non-member country of WCPFC, has expressed interest to become a full member. But several WCPFC members impacted by the blue boats are not keen to accept Vietnam into the commission.

FSM Head of Delegation Eugene Pangelinan said the problem is being exacerbated by Vietnam’s failure to provide any regulation or control over boats that have been arrested in FSM waters.

It is a matter that goes way beyond our imagination.” Pangelinan said, describing how these activities seem to be condoned by flag states that allow a large number of vessels to go out beyond their monitoring capabilities or ability to exercise flagship obligations.

At a plenary session, the Vietnam delegation recommended that a hotline be established between the Asian nation and the islands so future incidences could be addressed through communication. Pangelinan rejected the suggestion. “We don’t feel like a ‘hotline’ is what the Law of the Sea convention calls for,” he said. “We want them to live up to their flag state duty to prosecute or take other actions against the blue boats.”

Between December 2014 and September 2016, the FSM has seized more than nine Vietnamese vessels and arrested approximately 169 crew members, according to a briefing paper distributed to the media at an earlier Pacific Island Leaders Summit in Pohnpei.

The FSM has borne the substantial cost of detecting the vessels, making the arrest, as well as transporting, feeding, and repatriating the crew members, Pangelinan said. He noted that some of crew members, who have been arrested and sent home by the FSM government, later came back and arrested again.

Suzanne Lowe-Gallen, chief of Compliance and Technical Projects for FSM, said surveillance and arrests of these boats has cost the FSM government more than $200,000.

According to Keobel Sakuma, Palau National Marine Sanctuary executive director, the blue boats and their destructive practices affect Palau’s nearshore marine life, resources which are vital to the tourism industry and to the island’s food security.

WCPFC chair Rhea Moss-Christian also shared her perspective, “It’s certainly an issue of concern because it relates to Illegal, Unregulated, Unreported (IUU) issues in general and impacts small island coastal states,” she added that they will wait and see what the most affected members have in terms of proposals or requests for action.

FSM, which has been gravely affected, urged the commission needs to address the issue. “The impacts of IUU are not localized, but are felt across the region. And as such, collaboration is key toward combating the detrimental effects of illegal, unreported and unregulated fishing, in particular these unacknowledged, uninvited and unwelcome blue boats,” according to a statement by the FSM government, which was read before the commission.

The Forum Fisheries Agency will be taking steps to put into place a number of surveillance mechanisms that will allow assistance to countries that are being affected by the problem. “As a regional agency we recognize that we have a responsibility and there is an opportunity for us to use the regional platforms and mechanisms that we have in order to support those countries to better monitor and survey any possible blue boat activities. So we are planning to bring together those parties that are currently being affected sometime in the first quarter of next year in order to discuss this strategy,” Movick stated, adding that the agency is looking at utilizing satellite surveillance to get a handle of the issue.

One economic impact of illegal, unreported and unregulated fishing on developing countries is the direct loss of the value of the catches that could be taken by local fishermen if the IUU fishing were not taking place. According to the Pacific Islands Forum Fisheries Agency’s 100-page report released in March 2016, illegal fishing in the Pacific Ocean is costing more than $600 million a year and is mainly being carried out by legally licensed fishing vessels, a report has found. The agency’s report is the first in-depth attempt to investigate, quantify and place a monetary value on the illegal, unreported and unregulated fishing practices in the region. “IUU fishing by the licensed fleet accounts for over 95 percent of the total volume and value of IUU activity estimated here,” the report said.

On the global level, the Conservationist group Oceana estimates that the world economy loses between $10 billion and $23 billion annually from illegal fishing. IUU harvests may be brought to market at a lower price as unfair competition to the same products from the regulated supply or as a mislabeled competing product. In either situation this illegal unregulated contribution to the market may lower the overall quality and price of products available, thus creating an economic burden on harvesters following the laws and regulations.–First published in Pacific Note