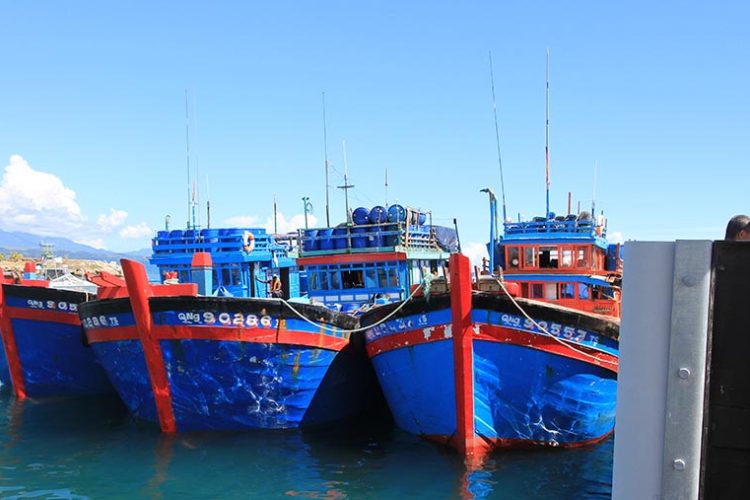 Does the Pacific have a system capable of mounting effective surveillance, capture and arrest illegal vessels and operators in its 20million-plus square kilometer fishery? The answer to that, over more than a decade of Surveillance Operations in the region, is an emphatic ‘Yes.’

But the newer question the region is asking itself has a mixed response. Can the region deal to the ‘Vietnamese Blue Boats’ threat putting our Pacific reef systems on the line? The answer to that is Yes and No.

Yes because the 17 Pacific Forum countries have a special system specially set-up to combat Illegal, Unreported and Unregulated Fishing (IUU) in its multi-billion dollar fishery.

The system called the Monitoring, Control and Surveillance (MCS) network run by FFA is enormously powerful. Its scope is oceanic, it has multiple international partners that contribute to it [the Australian, French, New Zealand and United States of America military collectively called the ‘Quad’], and all of the Pacific’s fisheries agencies’ IUU-related networks feeding into it.

Any lingering doubts about the power it wields were put to rest last week when the Royal Solomon Islands Police Force (RSIPF) apprehended three illegal ‘Vietnamese Blue Boats’ at the Indispensable Reef 50 kilometers south of Rennell Island, Renbel Province after being directed there by an aircraft provided by France under the FFA’s regional MCS framework.

Near midnight on Sunday, 26 March, RSIPF’s patrol boat Auki rammed and boarded the first of the four vessels, all of whom refused to stop when called. The crews of each vessel boarded were apprehended and detained aboard Auki. And even though sister patrol boat Lata later joined the fray, the logistics of managing arrested crew and corralling the three apprehended vessels gave the fourth ‘blue boat’ an opportunity to escape.

What the Solomon Islands operation demonstrated was the capability of the MCS system.

It could not have been better staged or timed as on Monday this week, the who’s who of Pacific Fisheries are in Honiara for the annual series of Monitoring, Control and Surveillance sessions to tackle IUU fishing in the Pacific tuna fishery.

FFA’s Director General alluded to the MCS network’s role in the Solomon Islands ‘blue boat’ operation, “It is important that we have this capability. That the fishing industry understand we have the capability to mount effective surveillance and to apprehend vessels if we need to,” Mr James Movick stated during his opening address to officials at the regions annual MCS working group meet. These sessions set the agenda for what MCS priorities are tabled to the regional Forum Fisheries Committee in May, with the outcomes set before Fisheries Ministers in July.

In essence, it is FFA within the regional MCS strategy that provides the centralized hub for the Pacific’s various fisheries networks such as the Regional Observer Program, Vessel Monitoring, Information and technology services. It then analyses the information from these sources along with other information layers at its Regional Fisheries Surveillance Centre (RFSC) to assess possible and potential illegal activities in the fishery. If aerial surveillance and other actions are needed to confirm suspected perpetrators, the RFSC then links with its Quad partners and assists Pacific nations in their comprehensive response if potential IUU is confirmed.

What’s more, another MCS tool the Niue Treaty Information System (NTIS) will go live in May 2017 giving the system a turbo boost of ‘power’. This will come through the Niue Treaty Subsidiary Agreement (NTSA) by allowing Parties to the agreement to cross vest other parties to help them enforce their own national laws. It also provides the opportunity in the future for partnerships with other border control networks besides the Fisheries network as they need to.

It means NTSA Parties would be able to also share their data and intelligence with regional law enforcement agencies and other related government line ministries like Immigration, Customs, Quarantine, Transnational Crime Units, and the like.

This extra capability will not only provide these new partners with information on vessels and people involved in illegal fishing activities but also a cross-sector platform to investigate those particular vessels and people. The new capability also lends itself to working together on how to enforce, how to follow-up action. It means that this new approach can be applied to any situation that involves IUU fishing and other transnational crimes usually linked with fishing vessels such as human trafficking and illicit trade.

There are two dimensions to the No- and they may set those who are so inclined to reach for their panic buttons, but they do demand an active regional response.

First, as the Pacific MCS system gets a super upgrade, its powerful applications now showing up the ‘reef robbers’ were created for one purpose only- ensuring sustainable management by deterring IUU activity in the region’s multi-billion dollar oceanic fishery.

“As we deal with the Vietnamese blue boat issue, technically this is not within the FFA’s mandate,” DG Movick reminded participants.

FFA’s core mandate is ‘to assist members to sustainably manage Forum countries’ offshore fisheries resources’. Which means that technically, FFA’s operations do not extend to illegal activities in coastal waters where the Vietnamese Blue Boats are illegally harvesting beche de mer or sea cucumber [worth between US$60 to US$300 per kilogram on the market].

According to Movick, “We got involved because every time there are illegal boats in the region everybody says, what is FFA doing about it. So we have the responsibility but also the opportunity of using the regional MCS framework.

“So we will be looking for a full mandate from member countries.”

There is urgency, and the process FFA is expected to take will be to raise the issue, firstly, at a meeting in early May in Australia for Pacific countries immediately affected by the ‘Vietnamese Blue Boats.

The ideal officials to attend would be Attorney Generals and other senior officials from countries targeted by the Vietnamese Blue Boats.

The aim of the meeting is to gain from these officials a direction on a mandate that FFA will take to the Fisheries officials and Ministerial meetings for some form of formalization.

“We do have a very effective tool in place and we do need to use it as these are problems that are affecting the sovereignty of our countries, the livelihoods and opportunities that exist for our own people to harvest these resources.

Vietnamese Blue Boats have ransacked beche de mer in other coastal nations in Asia, where strong action by Indonesia has made them move further afield into Palau, the first Pacific nation to raise the alarm. FSM began to report incidences and lately, PNG, Vanuatu, Australia and New Caledonia have had first-hand experience with these vessels. The latest arrests in the Solomon Islands have heaped more pressure on Vietnam to take responsibility for a problem which comes from their shores.

And another issue at play is the human rights context of this criminal activity.

Already sparking strong social media conversations in online groups across the Pacific, there are questions where Vietnam itself is remaining silent on its responsibility. What is it about the economic situation confronting these young men, where they are heading out to sea on vessels which are illegal in design, intent and goal?

The crews work in illegal, inhumane and risky conditions for unseen masters reaping the high-value financial benefits of feeding the global beche-de-mer market. For them, there is an inevitable nature to their capture, apprehension and jail in foreign lands where the conditions of their captivity are like a holiday compared to their working conditions at sea.

It may be these and other peripheral issues which help the Pacific bring global pressure on Vietnam to take responsibility for its reef robbers.–First reported in Pacific Guardians