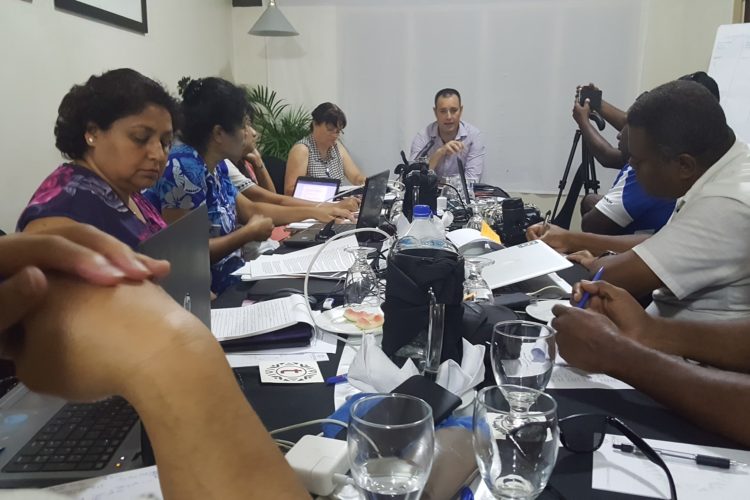 The 800 or so Pacific islanders who work as independent observers on tuna boats are some of the region’s unsung heroes.

They work alone as the eyes and ears of the Pacific’s monitoring and compliance efforts, alongside crews who may not want their activities made public. As a result observers risk harassment, intimidation and even murder.

Pacific nations made improving observer safety one of their top three priorities when they met with the fishing powers in Nadi next week at the 13th session of Western and Central Pacific Fisheries Commission (WCPFC).

“The observers are playing important but far more dangerous roles than they ever have before,” Wez Norris Deputy director general of the Forum Fisheries Agency told a group of Pacific editors gathered in Nadi to report on this year’s Commission meeting.

“Traditionally, observer programs are science based – they are there to collect information that gets fed to the scientists for their work.

“Observers are more and more being called upon now for compliance functions as well so the information that they record is used by fisheries compliance officers in investigations and prosecutions and so on,” said Mr Norris.

Their bigger role is exposing observers to increased threats.

“It exposes them to intimidation …it also exposes them to bribery and corruption issues,” Mr Norris said, “we need to take that very seriously as the information that they are collecting is absolutely essential, we rely on it very heavily.”

“We’ve been given very clear instruction by the Pacific Fisheries Ministers that these people need to be looked after. It’s a daunting job that they do and it’s very valuable to us.” Mr Norris said.

The issue came to a head in the WCPFC last year as a result of serious incidents including murder of two observers from Papua New Guinea.

“We have pushed through quite a bit of reform throughout the year,” Mr Norris said.

“If they get word from their observers that there’s a particular issue on a boat, they(have) a range of responses from simply liaising with the owner of the company and the master of the vessel, all the way to ordering vessels back into port immediately, disembarking observers, taking compliance action and so on,” Mr Norris explained.

“At the same time we see a very strong need for the Commission to have specific rules in place that require flag states and fishing companies to take specific actions.

“We want to make sure that we have as holistic a set of arrangements as possible.”

Both flag states and observer providers have responsibilities.

The FFA Deputy DG said that particular issues that they need to deal with include the issue of insurance and making sure that observers are adequately covered by the various forms of insurance – income protection, health insurance, life insurance and so on because it is dangerous working on fishing vessel and incidents do happen.

The two other highest priority areas in terms of the technical work at this commission meeting were not as well-supported as Observer Safety. They are harvest strategies and the bridging measures for tropical tuna and albacore.

Harvest strategies is basically a way of pre-agreeing management rules that the Commission would implement if a tuna stock got to a certain point or a fishery got to a certain  level. It’s the way of increasing the role of science in decision making for the Commission and decrease the opportunity of politicization of some of these decisions, Norris explained.

“FFA members put forward a proposal for an Albacore target reference point last year and it wasn’t successful for a couple of reasons. First of all because it is a new concept and these things get a little while to get people on board. Secondly, currently, the Albacore fishery is currently lower  than that target reference point, so it’s at a state that’s depleted lower than where actually want it to be.

“So, there’s a real fear among Commission members that once you adopt a target reference point then you also have to adopt catch and effort reduction to get back up to that target. That’s a real concern and a valid once.

“Our argument is that, adopting a target reference point is like making a statement of intent. It’s the Commission agreeing “this is where we want that fishery to be.”

He says one of the other components of a harvest strategy, important for the WCPFC13 was to record objectives for each one of the fisheries. This work, increasingly important as the Pacific heads to WCPFC14 in Manila, will focus on managing the three main fisheries in the Central and Western Pacific Tropical Purse Seine fishery. Operating mainly in the Parties to the Nauru Agreement (PNA) EEZs, managed under the vessel-day scheme; there is a tropical long line fishery, which is primary targeted at bigeye and yellow fin and that operates around the equator, and a sub-tropical long line fishery, which is primarily targeted at South Pacific Albacore.–ENDS