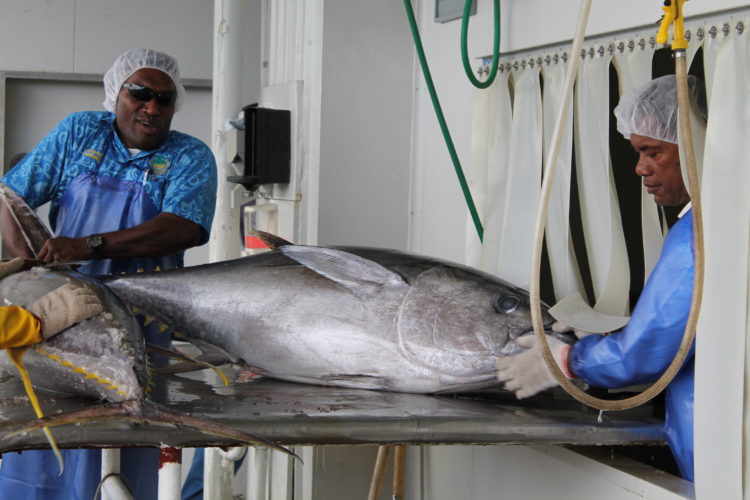 FIJI has started negotiations with Tuvalu and Kiribati for access to valuable fishing grounds in the Northern Pacific.

It is the first part of a three-phase plan which includes a Fiji-based and owned long line fleet to boost supply to Fijian canneries and create employment.

Fisheries Minister, Commander Semi Koroilavesau, confirmed he had held discussions with senior officials in Kiribati, Tuvalu and Wallis and Futuna.

“We want to follow the tuna on its migratory route for six months of the year,” Koroilavesau told Islands Business at the Western and Central Pacific Fisheries Commission’s 13th Regular Session.

It is understood that the Solomon Islands has been reluctant to allow access to Fiji-flagged longliners as it wants to protect supply to its cannery at Noro on New Georgia.

But Fiji’s discussions with Vanuatu have had better results.

“There is no reason our longline vessels cannot supply neighbouring countries and help create employment on shore as well as on the boats,” he said.

“Hopefully we can bring in investment – even from locals – to create a Fiji fleet.”

Fiji had a successful pole and line industry in the 1970s and early 1980s but this was put out of business by South Korean and later Chinese-flagged longline fleets based in Suva.

Today Chinese companies operate longline vessels out of Suva and into the Pacific.

Koroilavesau said local fleet ownership was an important step towards sustainability of the industry and growth of Pacific economies.

These sentiments were echoed by Morris Brownjohn, Commercial Manager of the Parties to the Nauru Agreement – an alliance of eight Pacific countries plus Tokelau which as PNA control around 50 per cent of the global supply of skipjack tuna.

Brownjohn suggested that Pacific nations must look at ownership or renting of fishing boats as an option to the current system of selling licences.